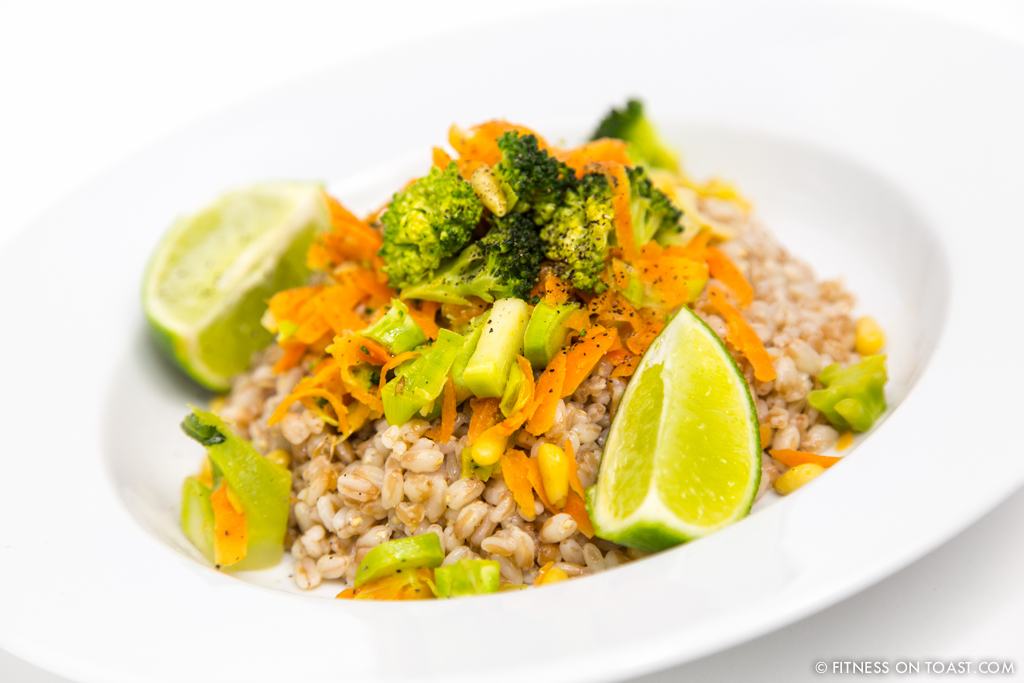 .
Introducing the runner up to ‘champion superfood’ Quinoa… it’s Spelt, a weird cross between emmer wheat and goat’s grass. I picked some up the other day at the lovely Daylesford Organic in Notting Hill (there’s one in Selfridges too). The spelt is easier to digest than many other wheats, because of its brittle gluten structure. It can be an aleternative for some people with a wheat intolerance though it’s not gluten free (unlike quinoa). But just like quinoa it’s high in protein (10g per 100g vs 15g in quinoa), low in sugar (1.3g per 110g vs trace in quinoa), has plenty of fibre (7.4g per 100g vs a mere 3g in quinoa) and is mercifully low in fat (1.1g per 100g, of which saturates 0.2g, vs quinoa at 2g). As a tasting note, it’s quite nutty, mildly chewy, pretty neutral in taste, but decent for adding texture to a dish.

SO I put it into practise, with my high-protein, high-fibre, low-fat, low-sugar vegetable dish – pictured above! Aside from spelt, I’ve added:
– broccoli (full of vitamin C and antioxidants for immune health, dietary fibre to aid digestion, and vitamin A for healthy vision, as well as other minerals like manganese, calcium, iron, magnesium, selenium, zinc and phosphorus)
– carrots (rich in dietary fibre to aid digestion, vitamin A as above, and to reduce the risk of cardiovascular disease)
– leeks (rich in antioxidants to promote immune health, and calcium to condition muscles and strengthen bones)
– pine nuts (contains plenty of vitamin E to maintain skin by protecting it from free radicals – whilst its fairly high caloric content is mostly from fat, (hence why I only used half a 100g bag)  it’s rich in mono-unsaturated fatty which also helps to lower cholesterol in the blood)
– chilli powder (for a metabolic boost, and a flavoursome kick!)

If you find you want even more flavour try adding a vegetable stock to the boiling water. However try to pick a stock that’s relatively low in salt. I made it for friends and they loved it thankfully. The below recipe serves c. 4 people.