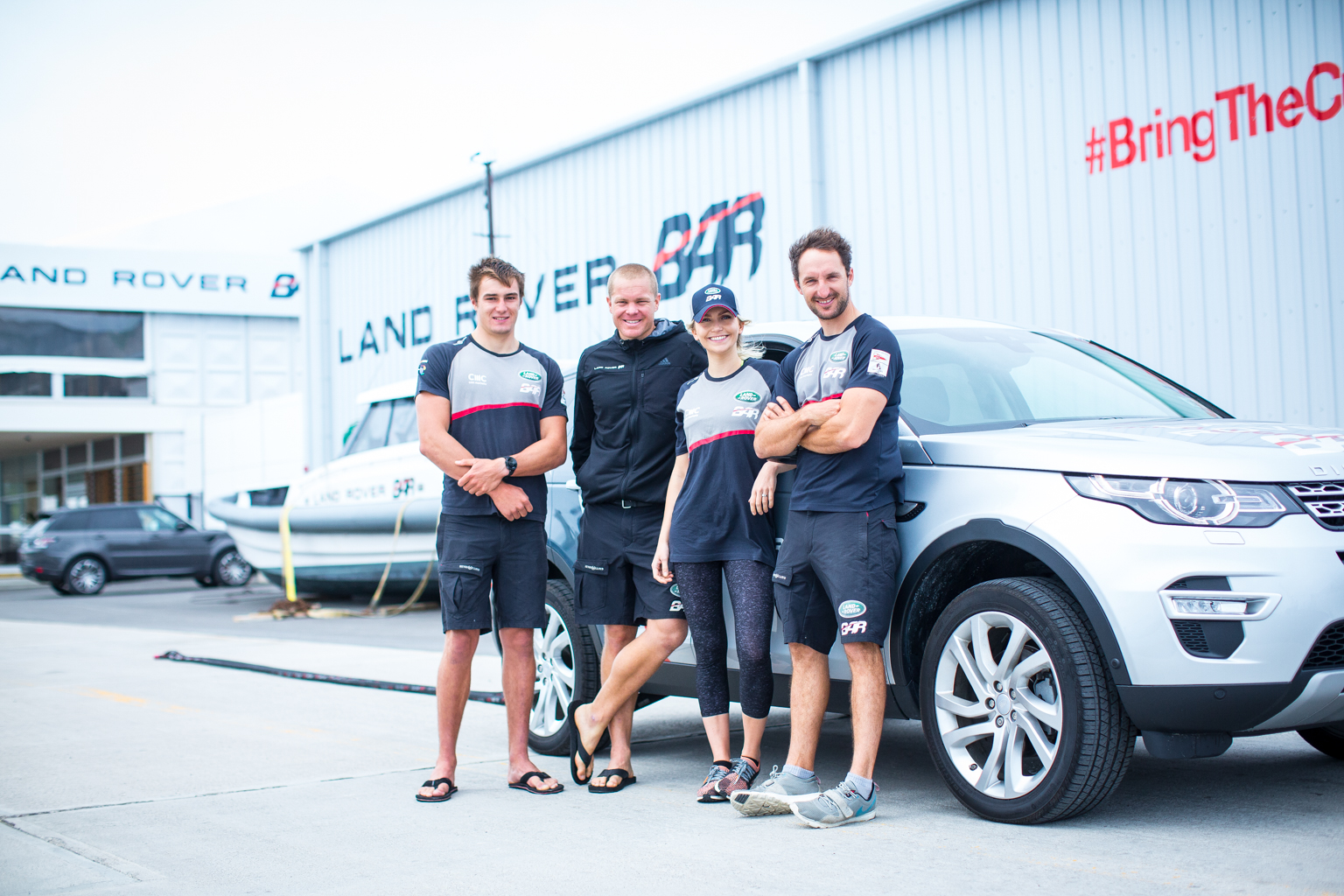 During my blog trip to Bermuda last month, I trained with the elite sailors from Team Land Rover BAR, the Great British hope for the 35th America’s Cup and run by the most successful Olympic sailor of all time, legend Sir Ben Ainslie. Whilst they’re a brand new team for this event, they mean business with a 150-strong contingent and a well-funded £80m budget; second place isn’t an option, they’re out to #BringTheCupHome. This was a pretty unique and exceptional opportunity for a bit of an amateur sailing geek like me. I’ve previously featured professional sailing teams on my adventures with Helly Hansen, and indeed myself trained with Team Concise, as well as participating in Cowes Week 2016 (placing third!). The America’s Cup is something altogether different; akin to a Formula 1 on water, it’s the hardest cup in all sport to win, with only 4 nations having won since it began in 1851 – and NOT Britain, yet. This year for the first ever time, it’s being held in the Great Sound, a sheltered yet windy expanse off the Bermuda coastline. This is the most glamorous and intensely competed meet in the sailing calendar, and I was allowed super-rare insight into the team’s training regime. Warning: it’s beyond gruelling! Read on… 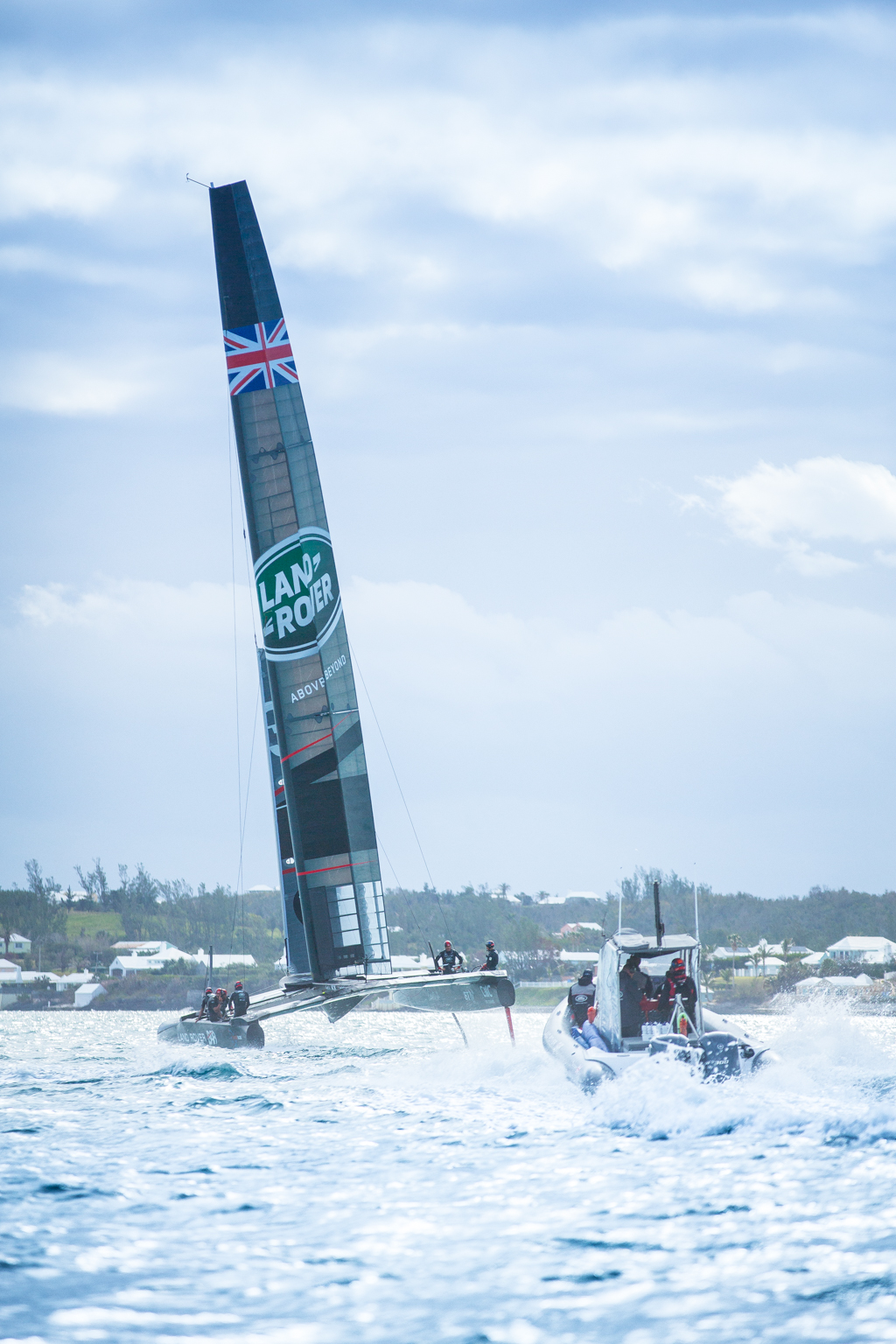 A foundation to establish before we go on; ‘Grinding’ is totally unconnected to twerking, and a ’Grinder’ is not an app. For the purposes of this post, it’s the process of operating a manual winch, which adjusts the sails and mast direction. Manning this station is one of the most physically demanding processes in the nautical world, and can dramatically influence the performance of a team. When everything works in perfect tandem, these boats weighing *literally* tons can hover a meter above the water, cutting along on carbon-fiber hydrofoils at >40mph – with only the wind to propel them along on their flight. It’s a pretty awesome sight to behold, and indeed the key to total speed is the most stable, sustained flight through the water. Grinding is everything! 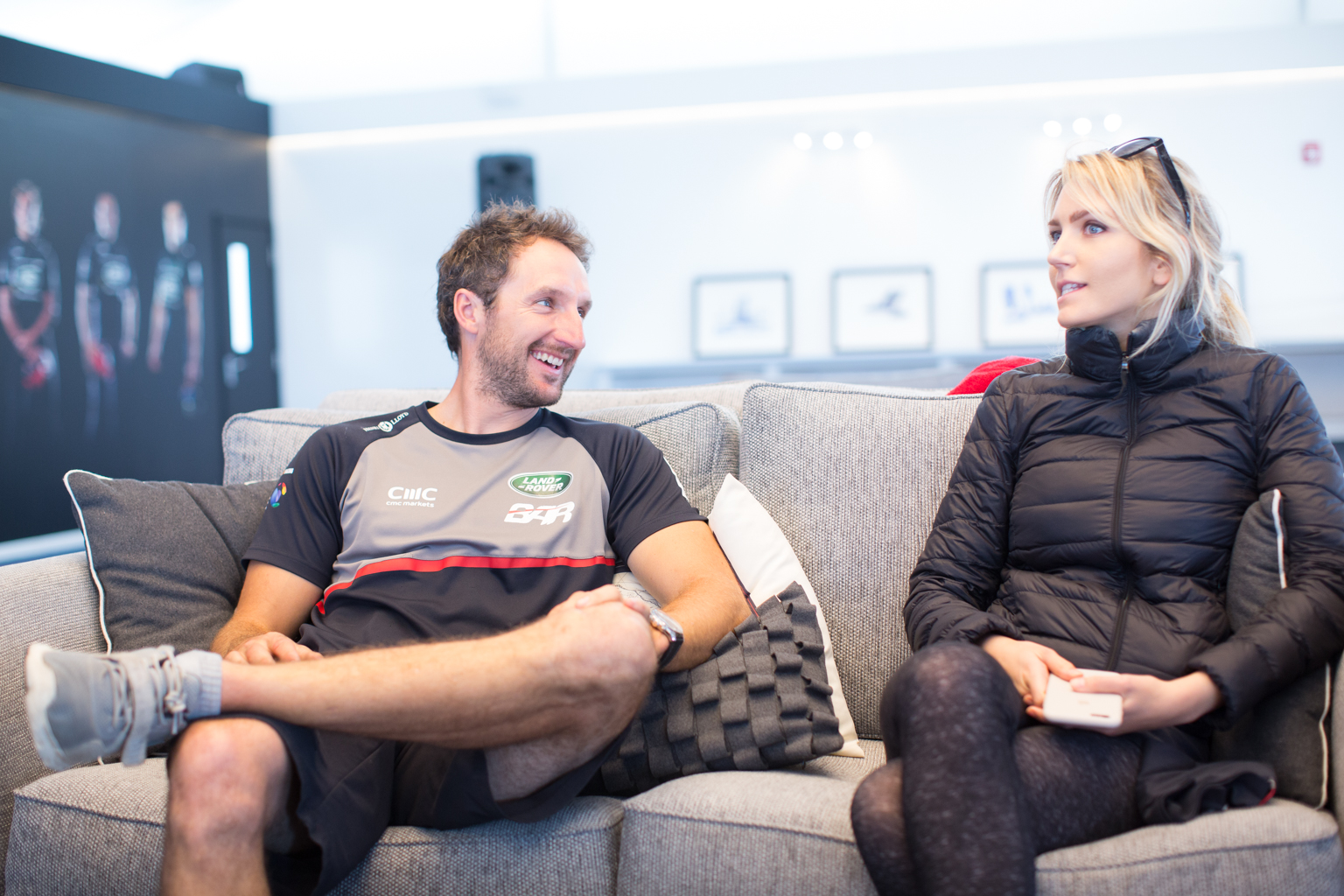 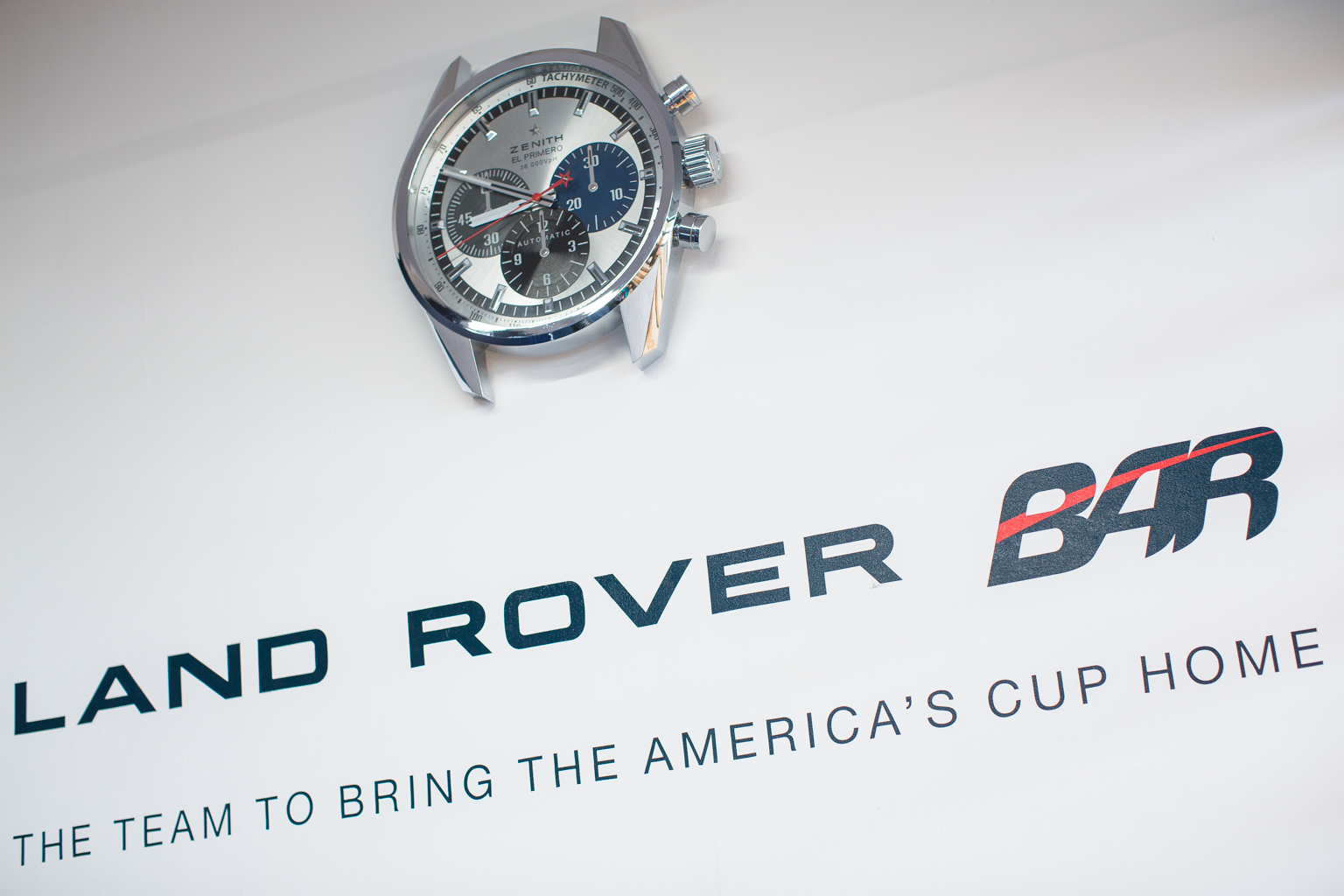 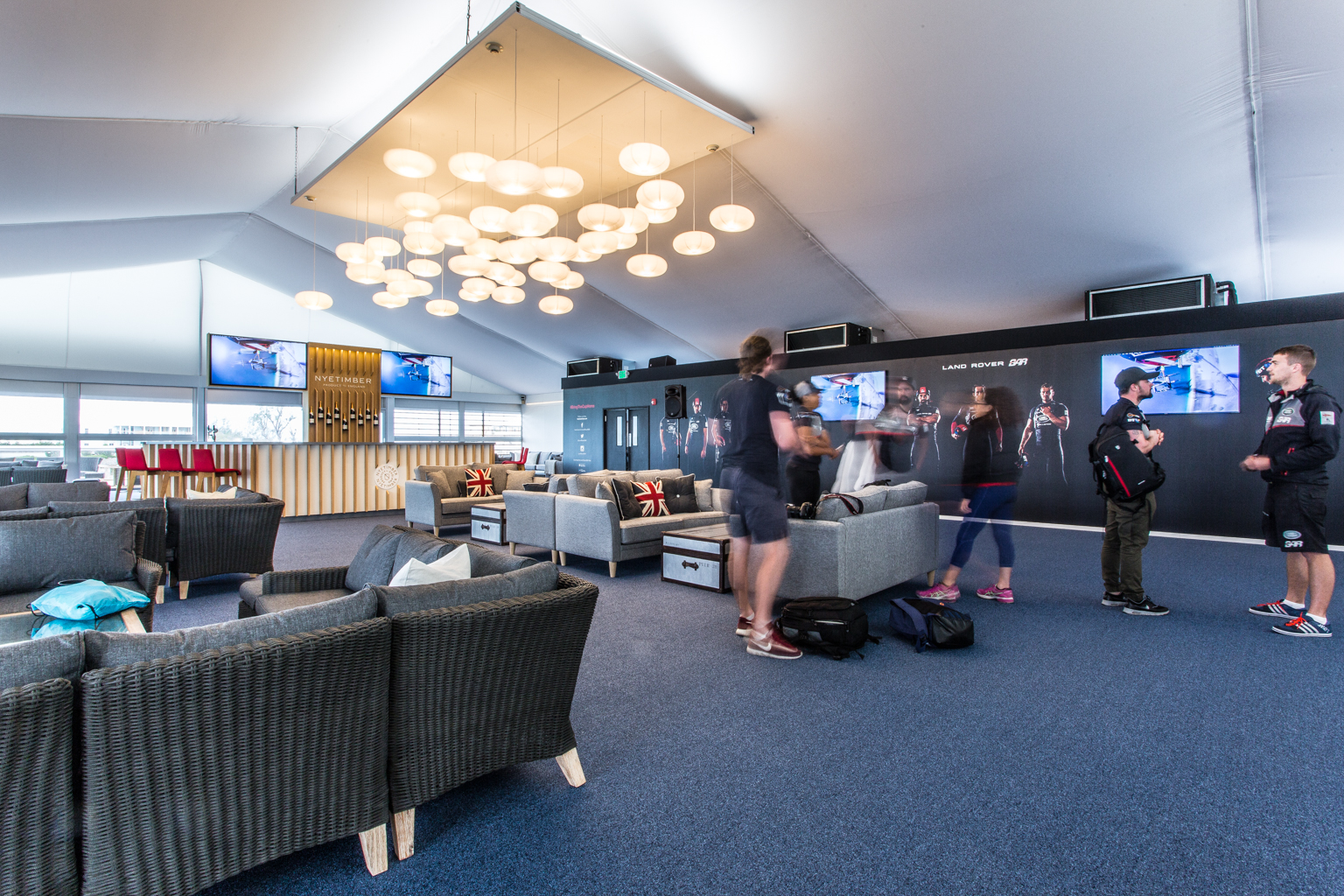 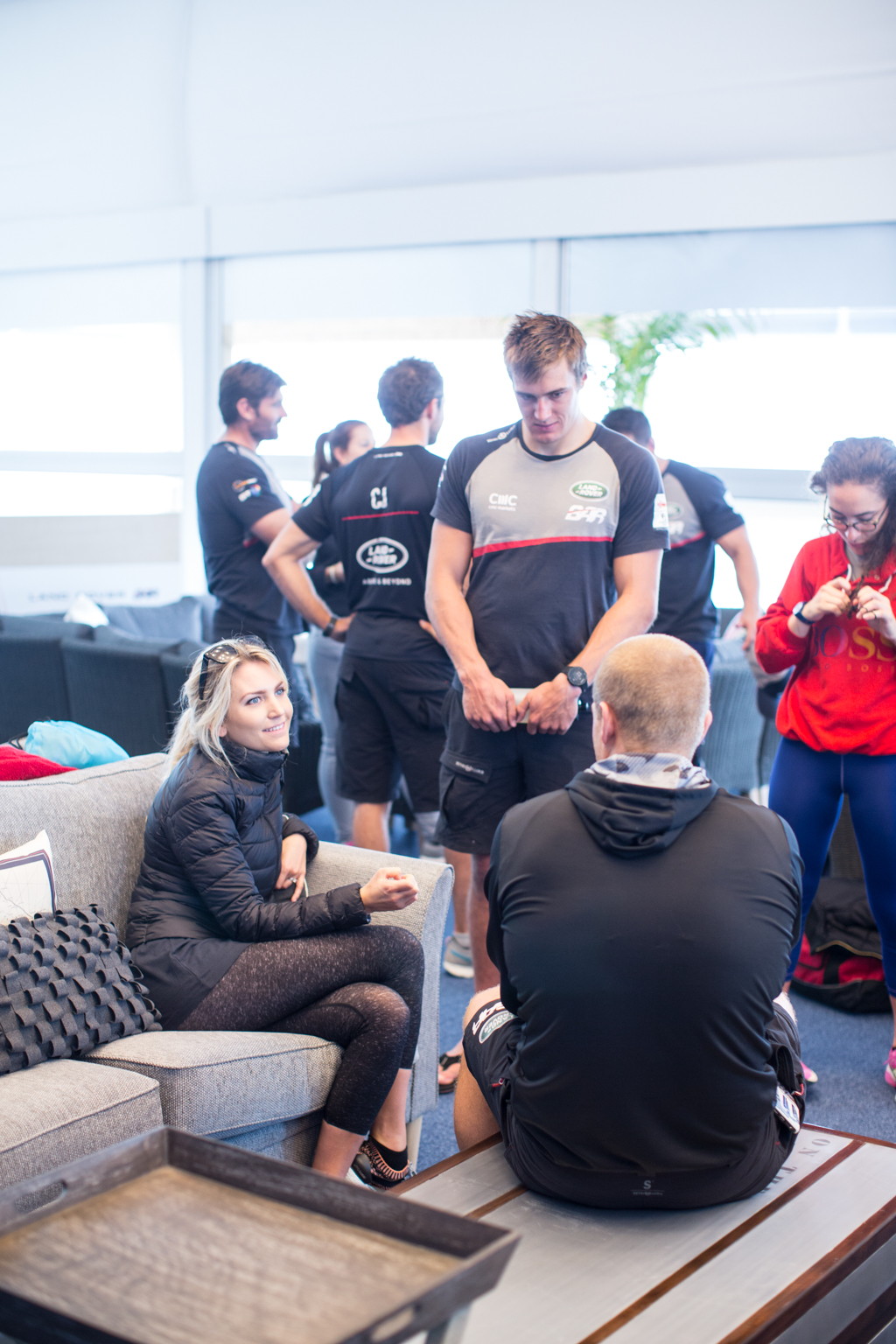 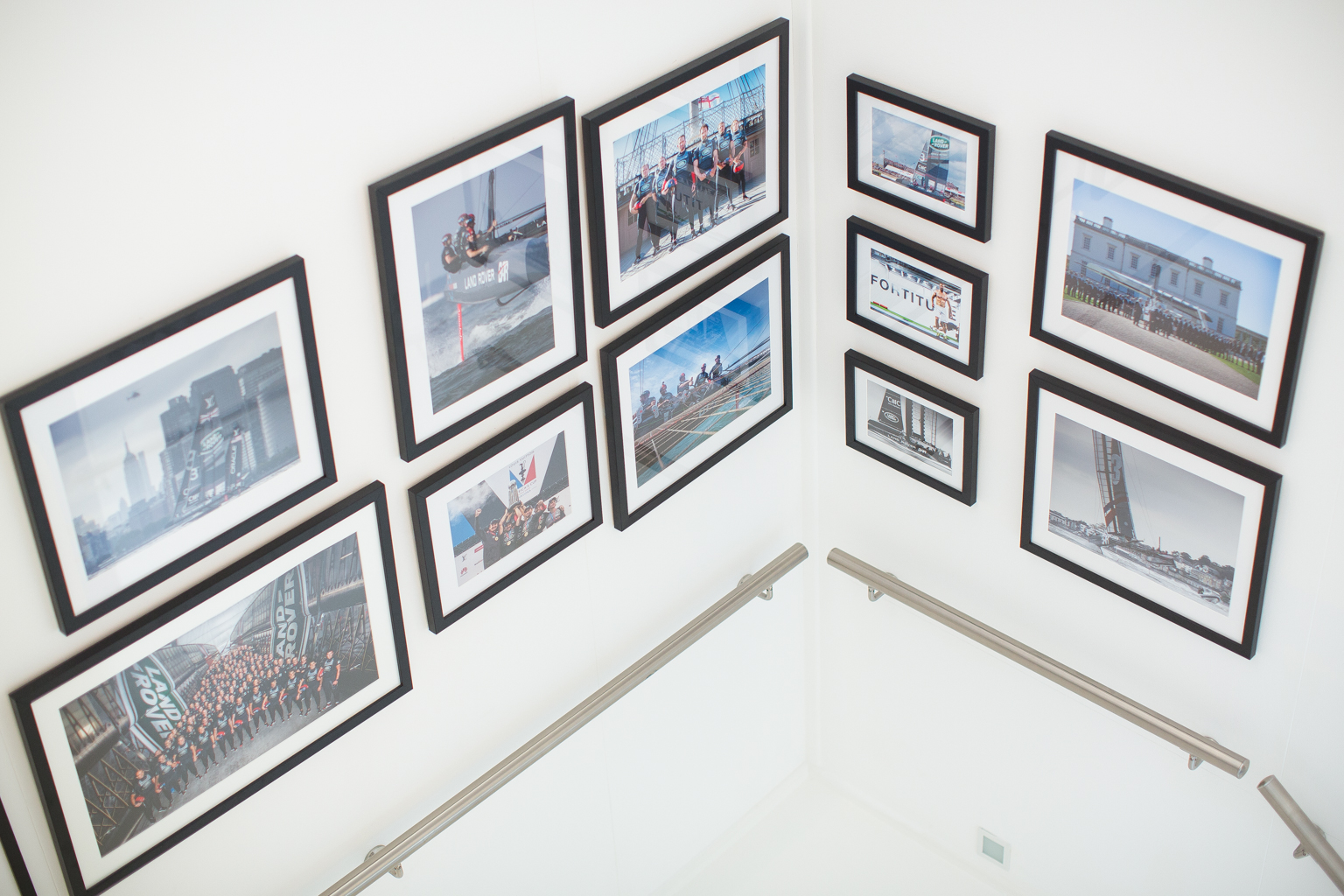 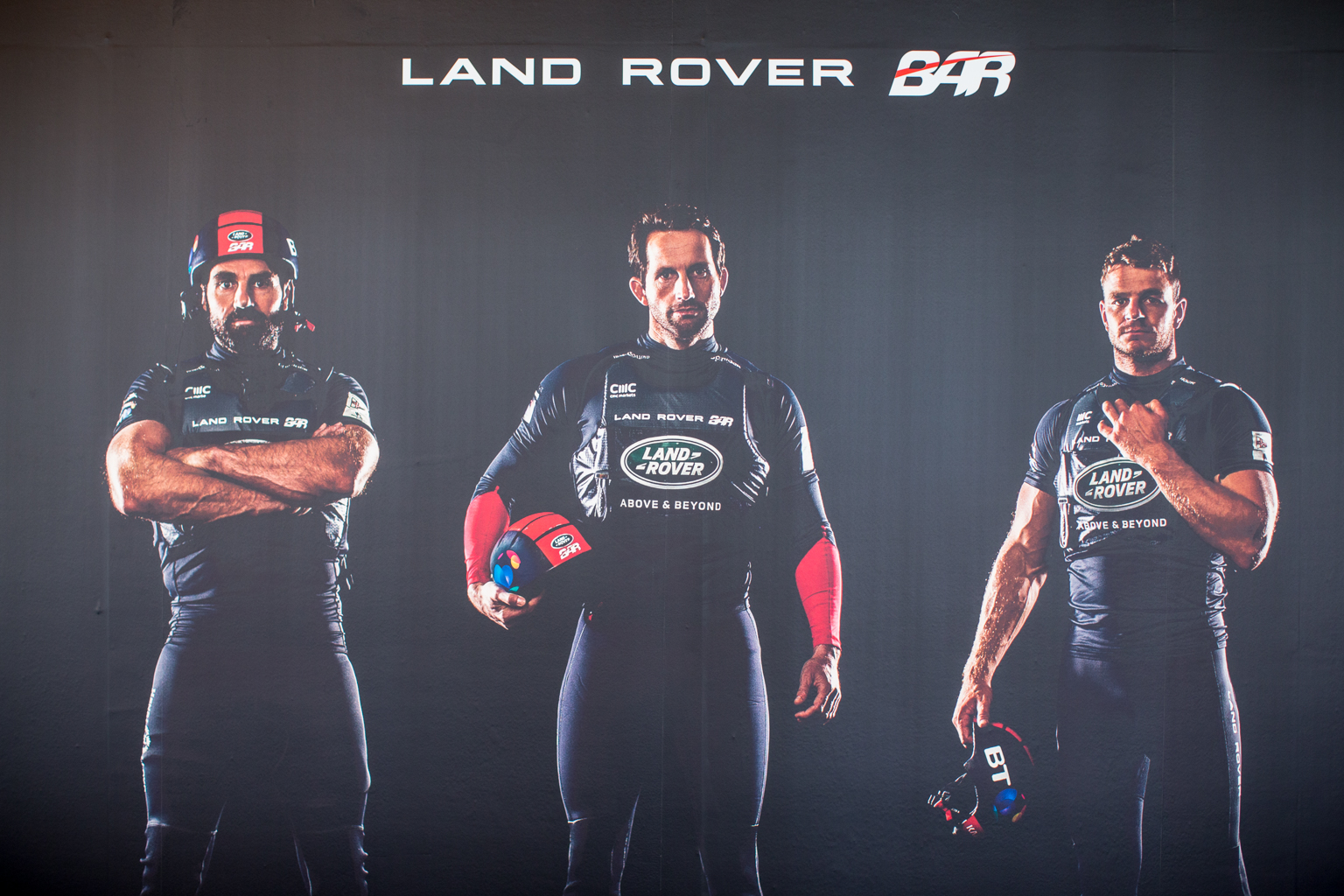 Before we kicked off our training session, I sat down with Paul Campbell-James and David ‘Freddie’ Carr, who occupy the senior positions of Wing Trimmer and Grinder respectively. In the comfort of the Land Rover BAR lounge, discussion ranged from the monstrous 8000-calorie diet, ample sleep, rare recovery days, and relentless strength training – as well as balancing family life with the rigorous discipline required to compete at the top flight. These are world-class, passionate athletes with unwavering dedication, and that’s always a totally humbling combination to encounter. 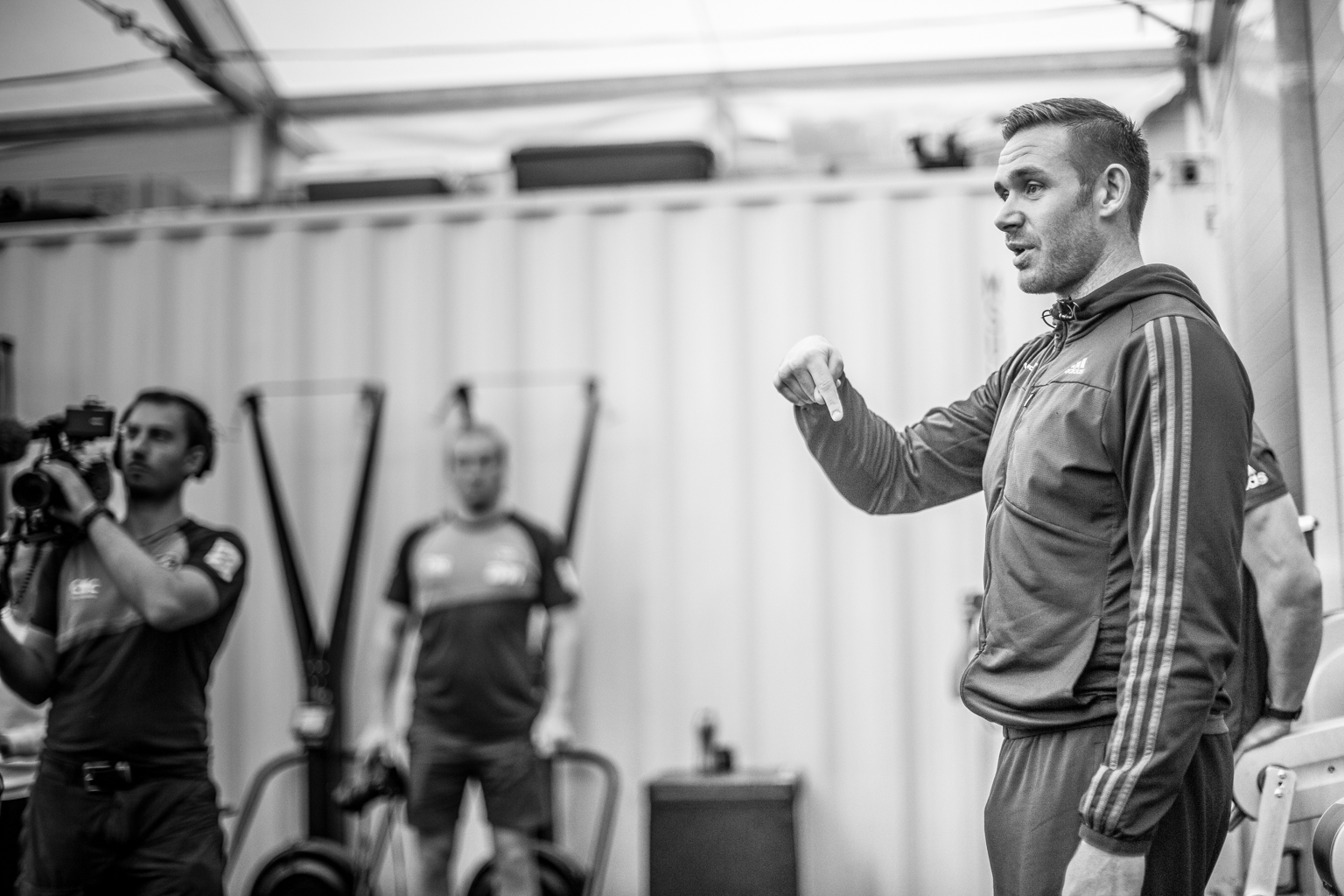 With the background discussions completed, it was time to sample some exertion. Enter Ben Williams (pictured above), lead Strength and Conditioning coach for the Land Rover BAR team, and the closest thing to a Drill Sergeant in the British Military. As an ex-Marine (and indeed with much of the broader team having some degree of military background too) he’s a force to be reckoned with, clearly having endured significant strength and conditioning through the years. Whilst the whole village is a temporary set-up, their team gym it is a vast, well-invested workout space with masses of equipment to choose from… absolutely none of which we used. 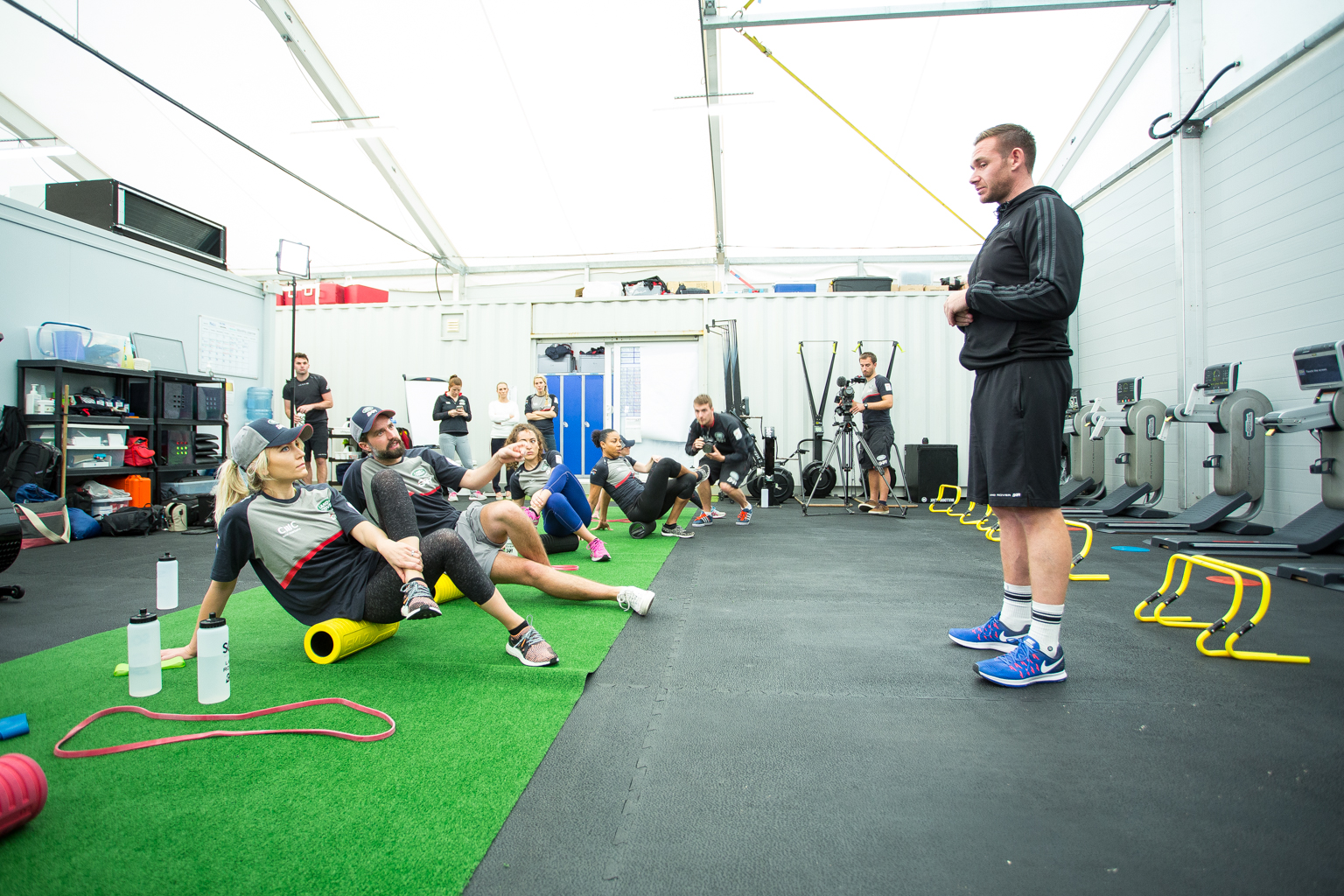 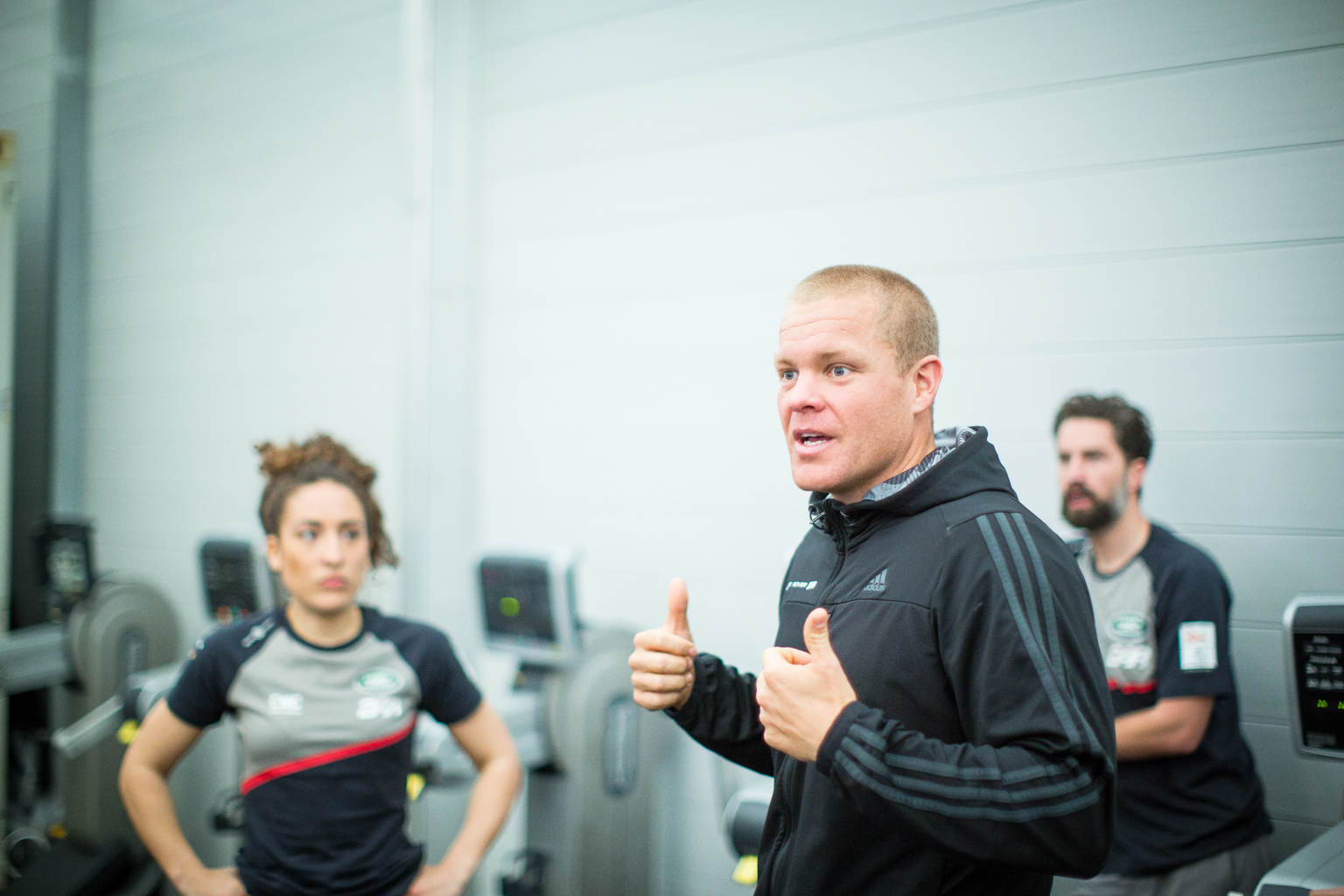 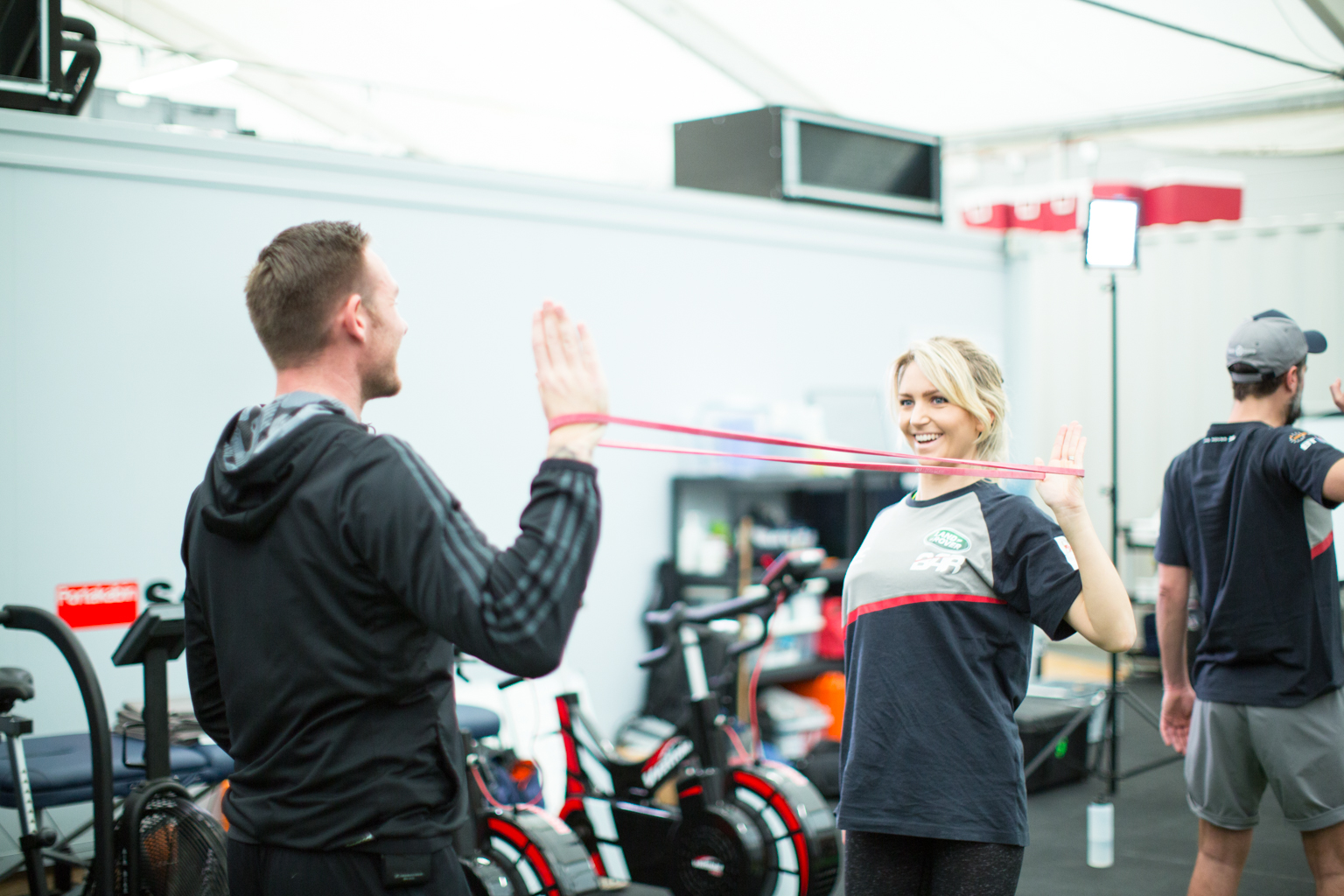 Instead, after a little warm-up resistance stretching, Drill Sergeant Williams wanted to illustrate just the sort of fitness level required to be a sailor. It was made extremely clear to us that several other elite athletes from other non-sailing disciplines had been put through the same challenge we were to face, but had all fallen significantly short of the power output required to compete in this sport. This is no leisurely pursuit, but rather a physically exhausting ordeal, such that Freddie compared his Grinding role to that of running countless 100m sprints in successions; the ultimate in HIIT

I can attest that it was incredibly tough! Working on the Technogym Arm Grinder machine, which mimics the movement you’d dispatch onboard a sailing boat’s “coffee grinder”, we unpredictably alternated between bursts of grinding at ‘sprint’ speeds and at less intense recovery levels. Ben would, at random times, call out ‘change’ whereby we would jump clean over a mock-hull to the other side of the room and sprint back again only to recommence hard graft on the Grinder. Then there were the ‘Sprint’ and ‘Reverse’ commands, and reverse sprint! This is essentially what a sailor would do grind and when necessary run across the deck to fix whatever needs attention. We did 12 minutes of this and by the end of it everyone was absolutely drenched in sweat, arms burning and bulging, and lungs lusting for air. It’s an unusually complete sensation of exhaustion, spreading across the whole body – quite effective as a workout! 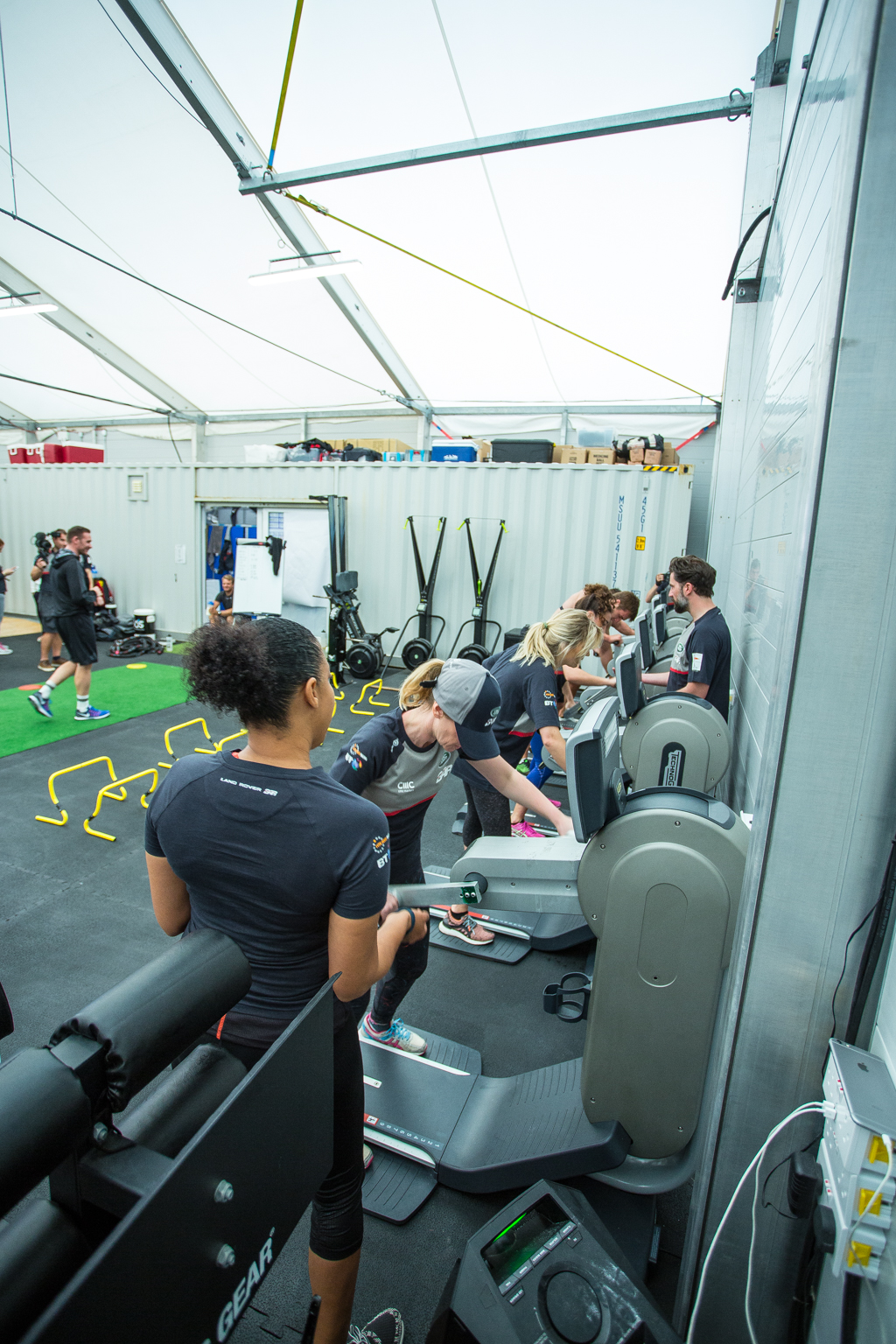 Whilst our group broadly operated on an average power output of 80-120 watts per minute, our ‘control experiment’ (team Grinder Neil Hunter) was churning out 230 watts and could have happily done so for hours, rather than our 12 minutes! Whilst the entire group work in the fitness industry and have pretty respectable levels of fitness/strength, we all struggled.

I continue to have the utmost respect for sailors; I personally think it may well be the most difficult sport out there, as it demands harmonious teamwork in an inhospitable environment, requires such absurd levels of fitness across all areas, AND simultaneously calls for an advanced sensory acuity to read nature with ultimate attention at all times – whilst operating giant machinery which is just itching to capsize on you at 40mph! 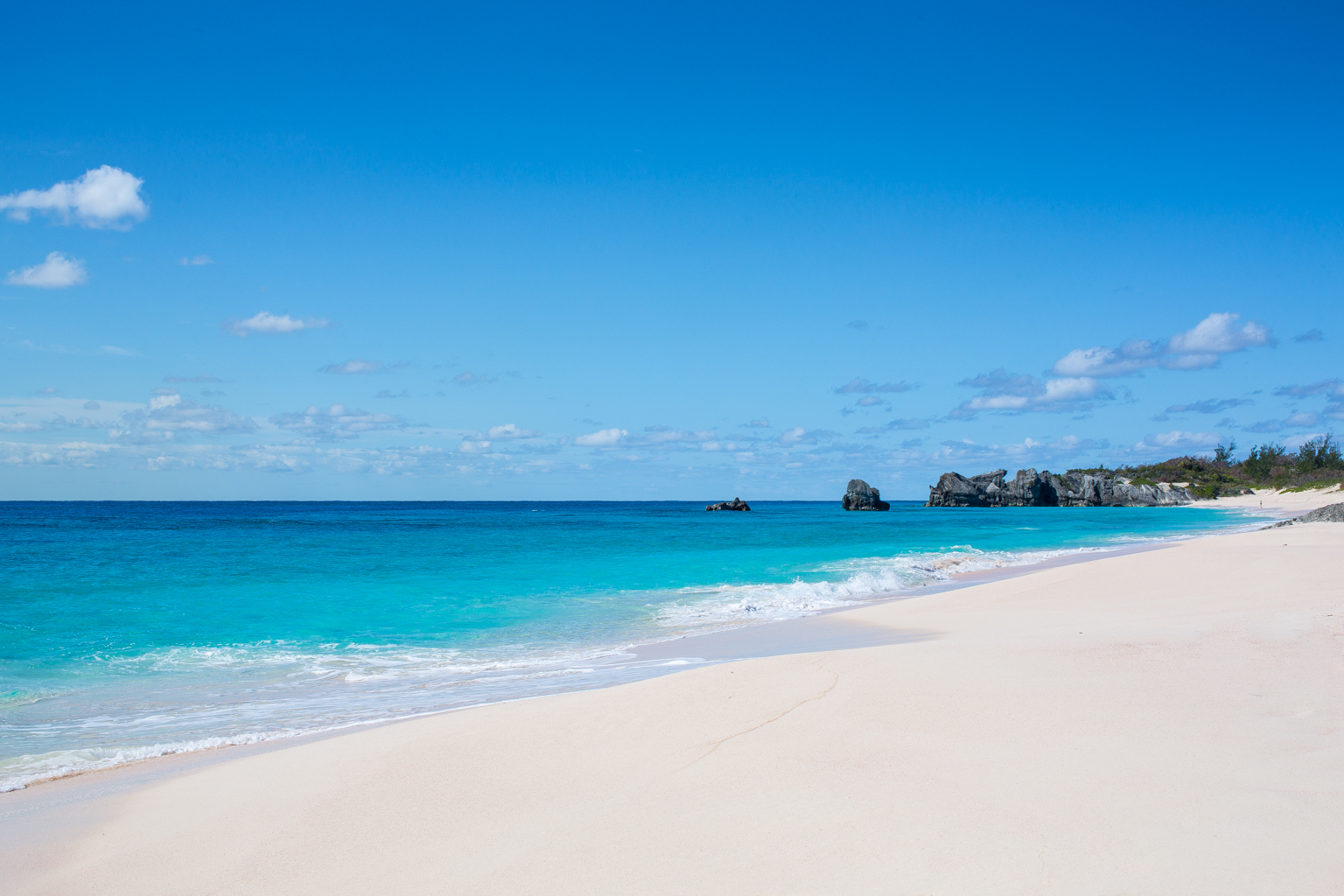 If you happen to be lucky enough to visit Bermuda over the America’s Cub it’ll be held at the Rib chase of Land Rover BAR on the Great Sound where the 35th America’s Cup, presented by Louis Vuitton, will be held. The schedule of events from 26 May – 27 June is HERE – (BAR is already 2 points ahead as they won the America’s Cup World Series). This is the real deal, and the most historic, prestigious event in world sailing. 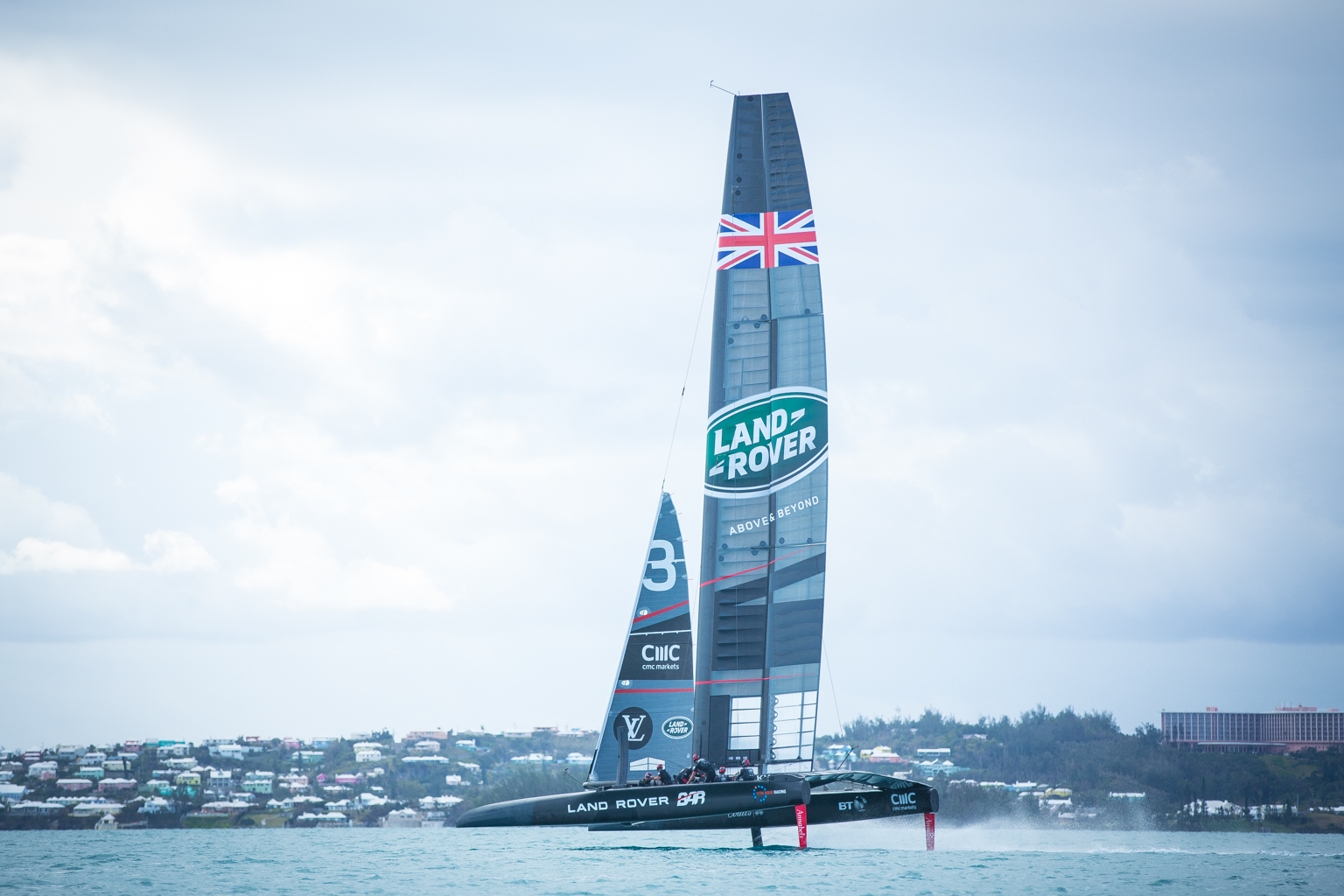