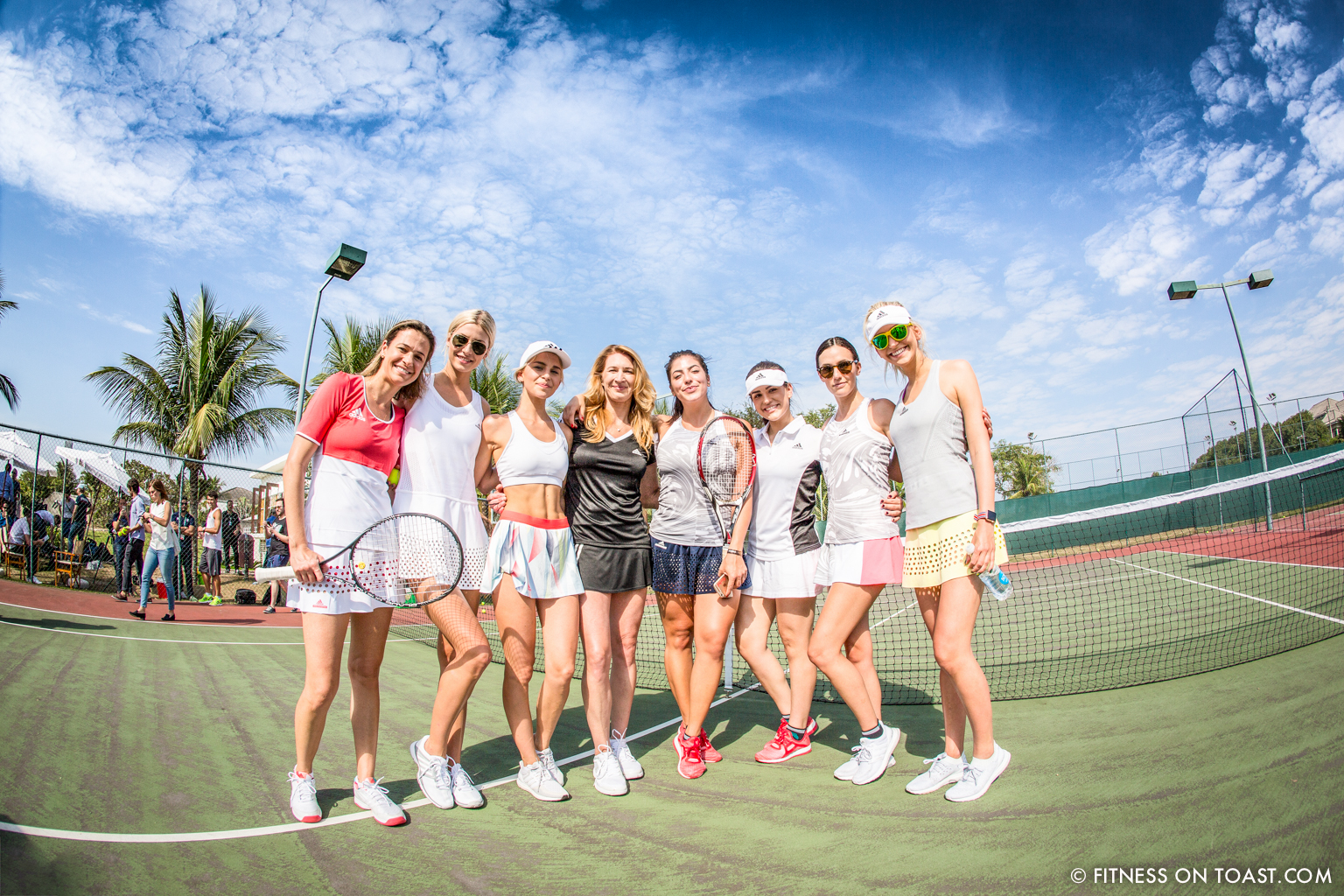 There are some sports figures who transcend the era in which they played; they’re few and far between, but they’re immortals, the ultimate hall of famers, era-defining legends, and their very names are synonymous with the sport itself. Bjorn Borg was such a character in my home country (and beyond), but on a scale almost unimaginable for two decades, it was Steffi Graf for the female game. During my Olympics trip to Brazil with adidas, I had the epic opportunity to meet, interview AND play with Steffi, who is herself a representative for the brand. It was remarkable for so many reasons! Click MORE to see and read about how we got on 🙂 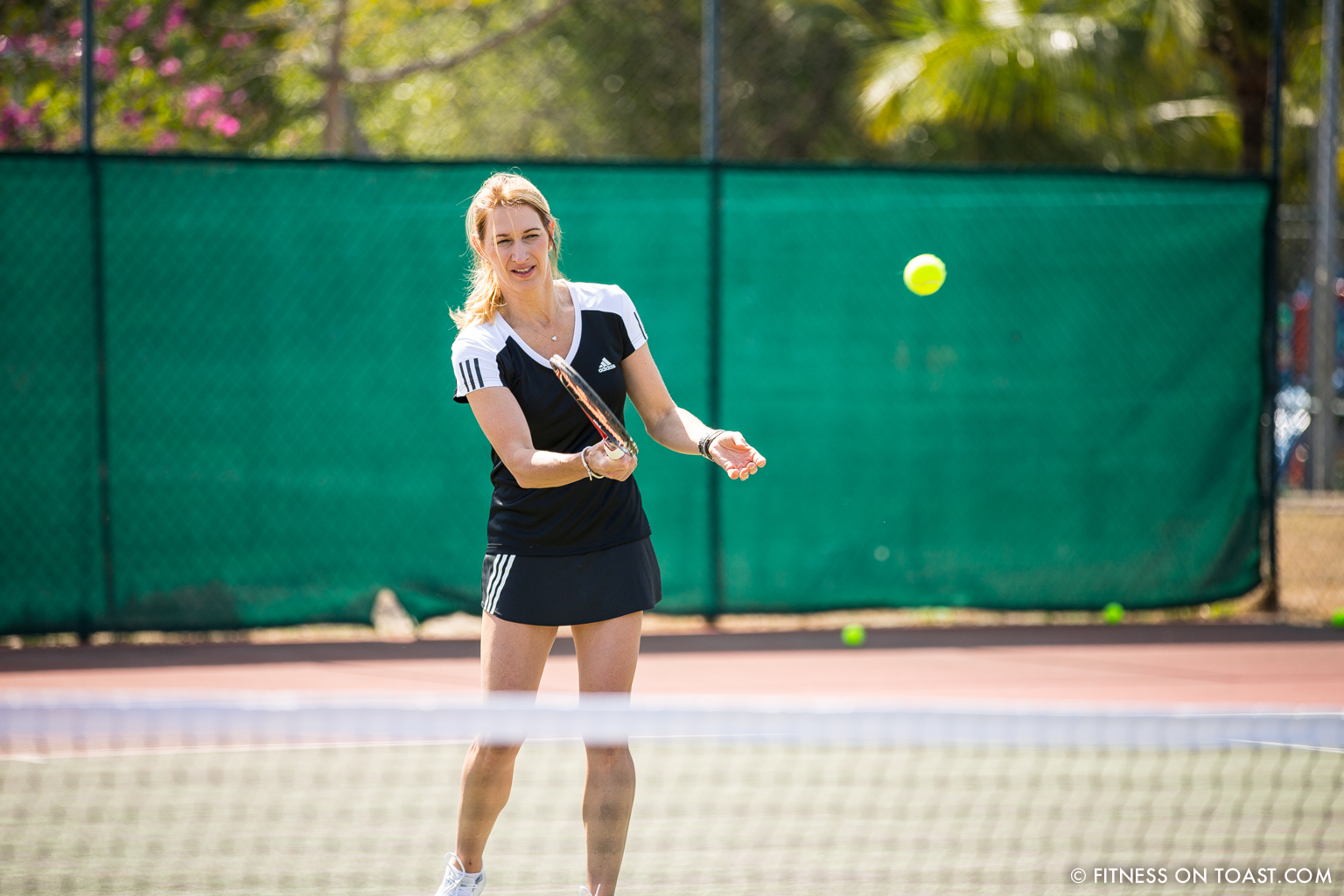 Over her 17-year professional career, she was World Number 1 for 186 weeks in a row, won a dominant 22 Grand Slam titles which Serena Williams only recently equalled at Wimbledon ’16, and she remains the only player (male or female) in history to have achieved the Golden Slam (all 4 grand slams AND Olympic gold in a single year), as well as being the only player to have won every Grand Slam at least 4 times. Through the 1980s and 1990s, she was tennis, and that domination has a permanence that has rendered her ‘an immortal’! adidas even created a tribute shoe to her which you can see here and in their Herzo museum! 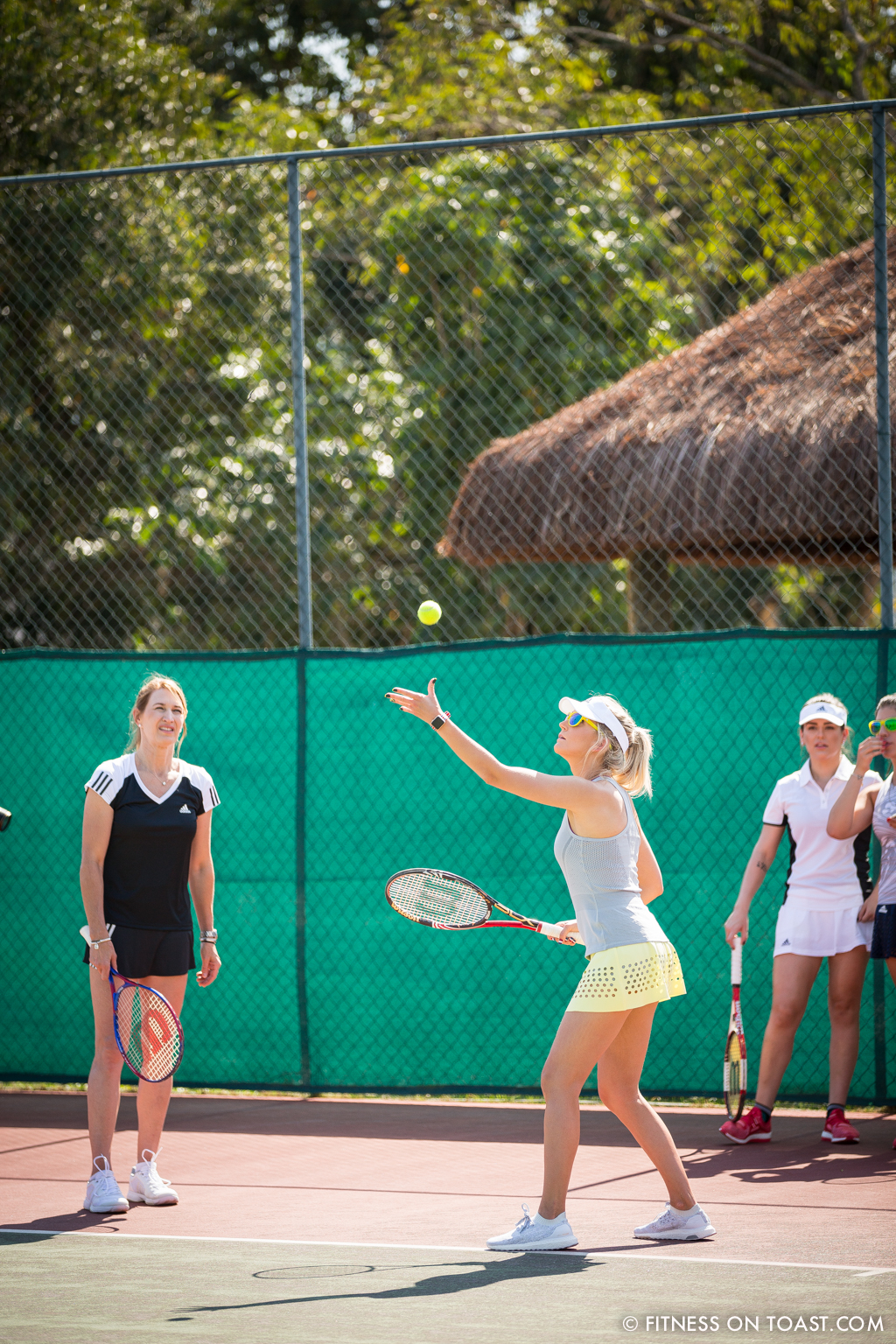 In person, she’s an unassuming 5’9 in stature and moves cautiously, but there’s an astoundingly imposing aura to her. In some ways, a remarkably normal mum-of-two, in many other ways, a legendary megastar, but at once relatable, gentle and quietly empathic. She came to Creator’s House in Barra, where I was staying alongside 4 other bloggers (Caro, Adriene, Kefera and Rachel), and after being joined by beautiful Lena Gercke, we headed outside to the courts for some drills! 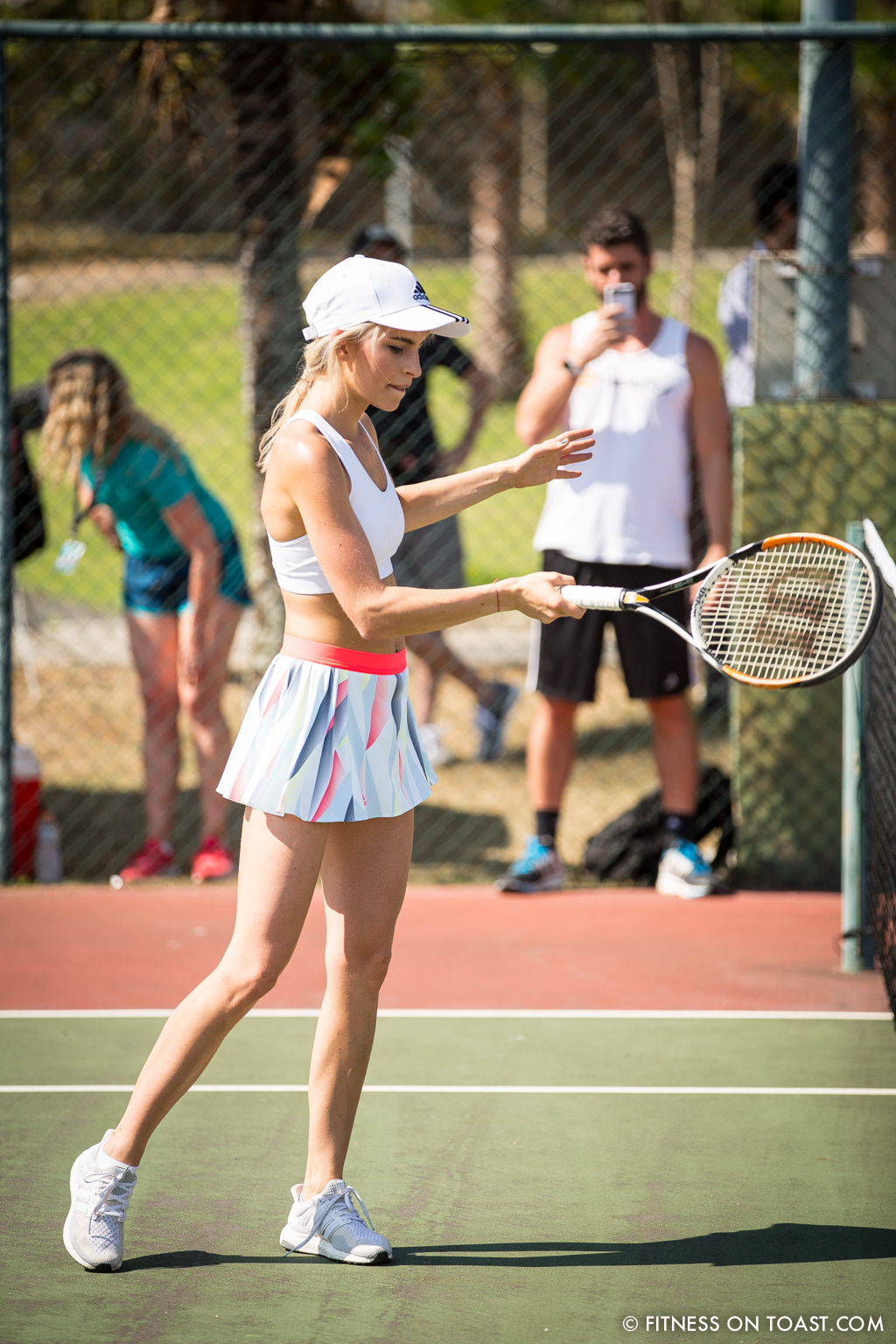 Despite being retired and playing infrequently, what immediately strikes you is her inhuman ball-striking. You don’t get an appreciation of that on a television screen, but seeing it in person is remarkable. There’s an efficient elegance to her compact style, and a beautiful, controlled strength to her racket’s impact with, and through the ball. Further, her footwork is wonderful to behold, anticipating and repositioning with minimal fuss but maximum effectiveness. Even tricky half-volleys are struck sweetly and returned with pin-point perfect placement as if she were at one with the court itself! 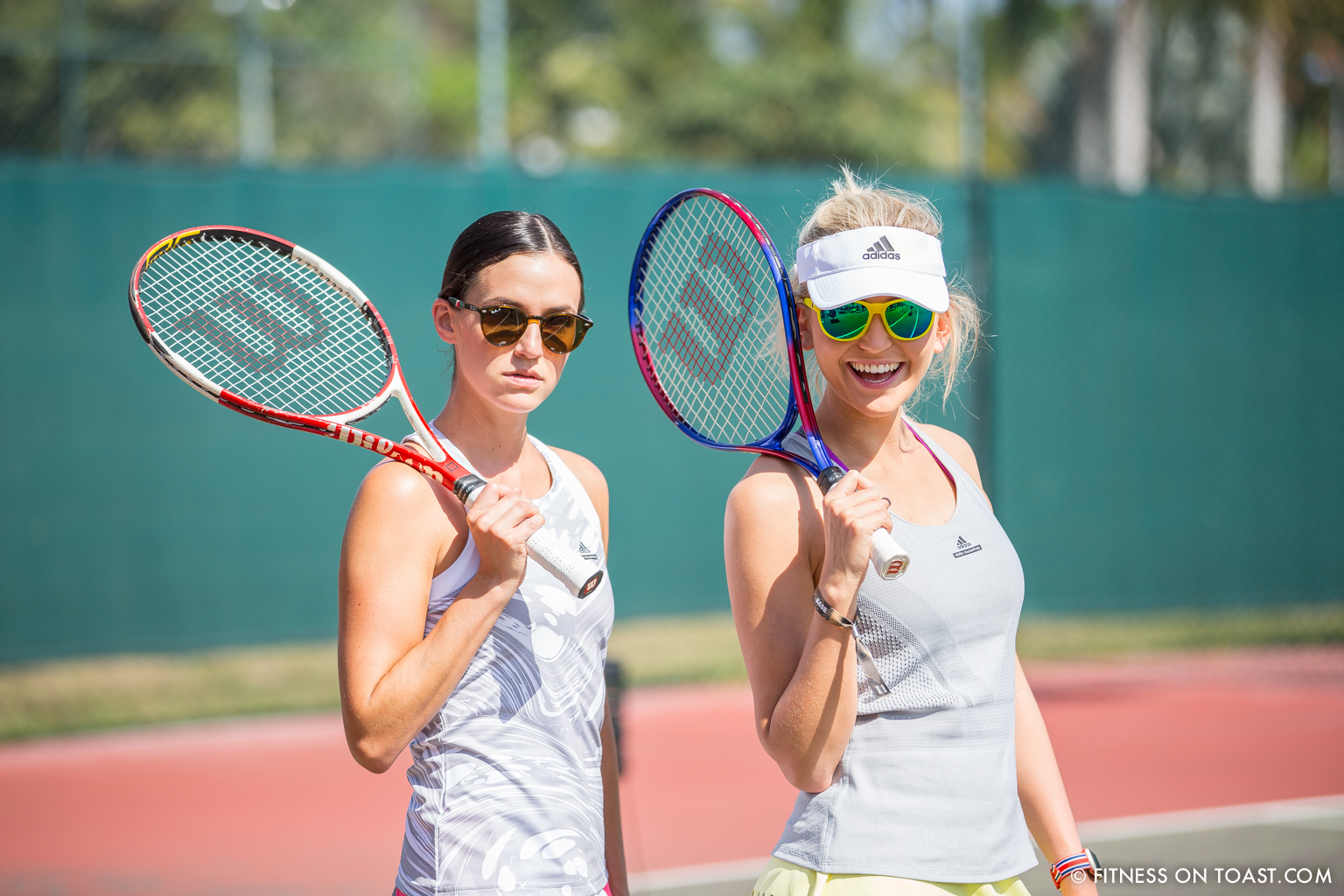 Steffi was on a tight schedule as she had media interviews to conduct over at the Creator’s Base, so the rotating ‘drills’ session lasted for around 45 minutes. Then I had a 5-minute chance to hit one-to-one from the baseline with her, trading groundstrokes toe-to-toe (I once managed to pass her, and melted!). I stopped early so that I could throw out my three key questions I like to ask any serious sportsperson! Here’s what she told me: 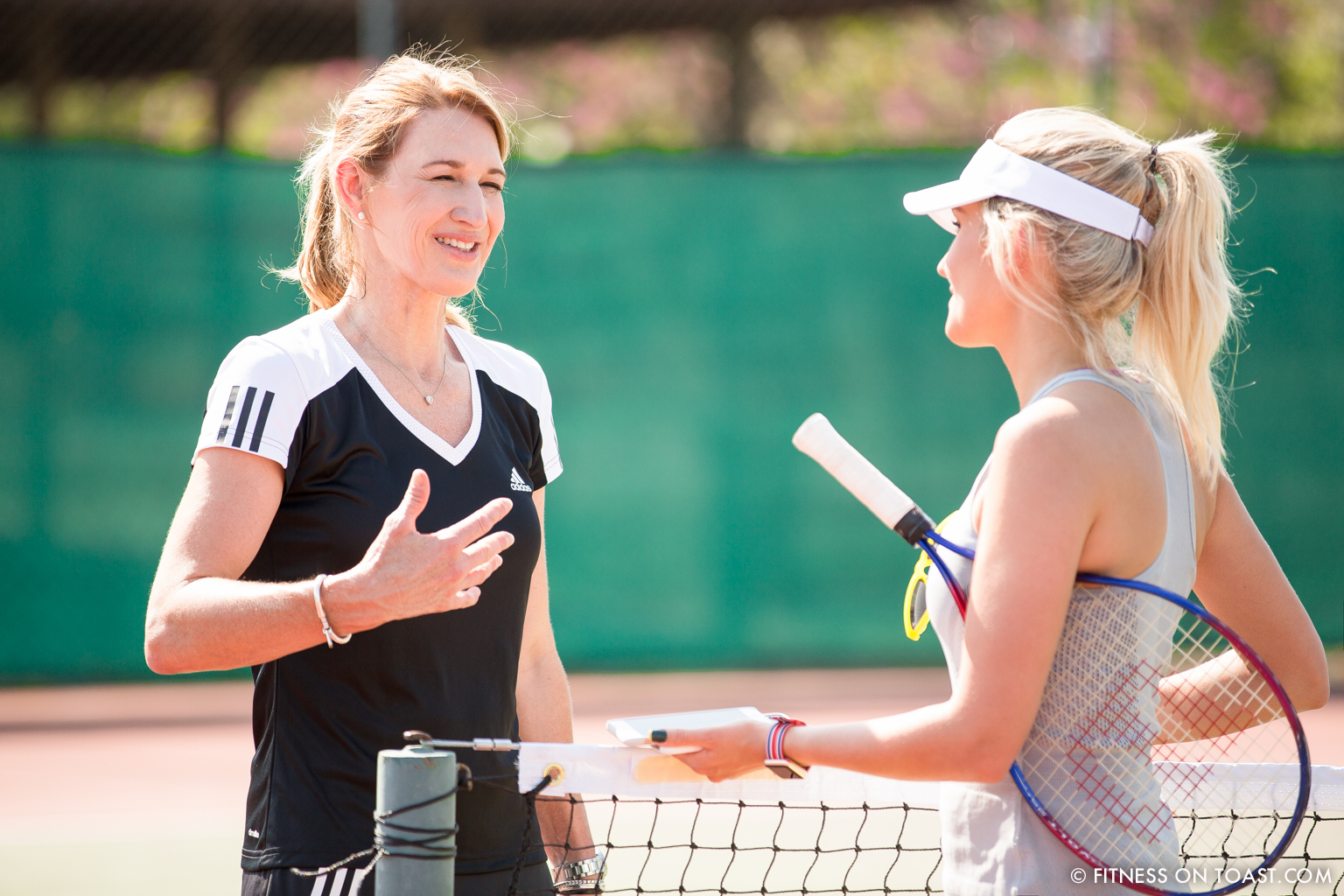 F.O.T: Through your career, what have you found motivates you the most when you’re really struggling?

SG: Actually sports helps me through a lot of things, especially now that I’ve retired. It’s such an outlet for me! Being a Mum, and having a foundation in which I still work with partners, I’ve got so much going on that my sport is actually my release where I can gain energy and shut off from the world for 45 minutes! It’s my time, so it’s really sport that helps me more than anything!

F.O.T: Aside from being on the court, what exercise do you do, and what helps you with Tennis specifically?

SG: At this stage in my life, tennis is not really a big part anymore! I haven’t played for quite a long time, to be honest! My body doesn’t really want it too much, as it’s been through so much from a young age; I’m paying the price for it a bit now! But I do like to stretch, I walk a lot, I have 3 dogs at home, so I go on ALOT of walks, and if I get the chance, I’ll head to the gym once or twice a week too. Also, I like weight training a little bit – not too much, just enough to keep the shape up! But I’m a pretty active person, and we’re a pretty active family, so all it comes naturally to be active! We’ll go from snowboarding to a little basketball here and there, so it’s a busy life, but a lot of fun!

SG: I try to start my day healthy! That’s one of the things I’ve learned; give it the right start! Sometimes it’s not easy eating right in the morning, but I prefer vegetables with egg whites, which has become my routine! Sometimes I crave something sweeter or heavier, so I’ll have oatmeal. I will also make sure to get my sugar throughout the day, I need that and have always enjoyed it – I need the little pick-me-ups through the day… chocolate perhaps, but more like cookies and some sweets! But on balance, I try to find a healthy mix of vegetables, fruits and protein… and a little bit of a treat!!!

At that point, Steffi had to dash to her media obligations, but I’d heard everything I needed; if a 22x Grand Slam uber-champion can sanction cookies as part of her regular diet, then I must be sure to consider the same 🙂 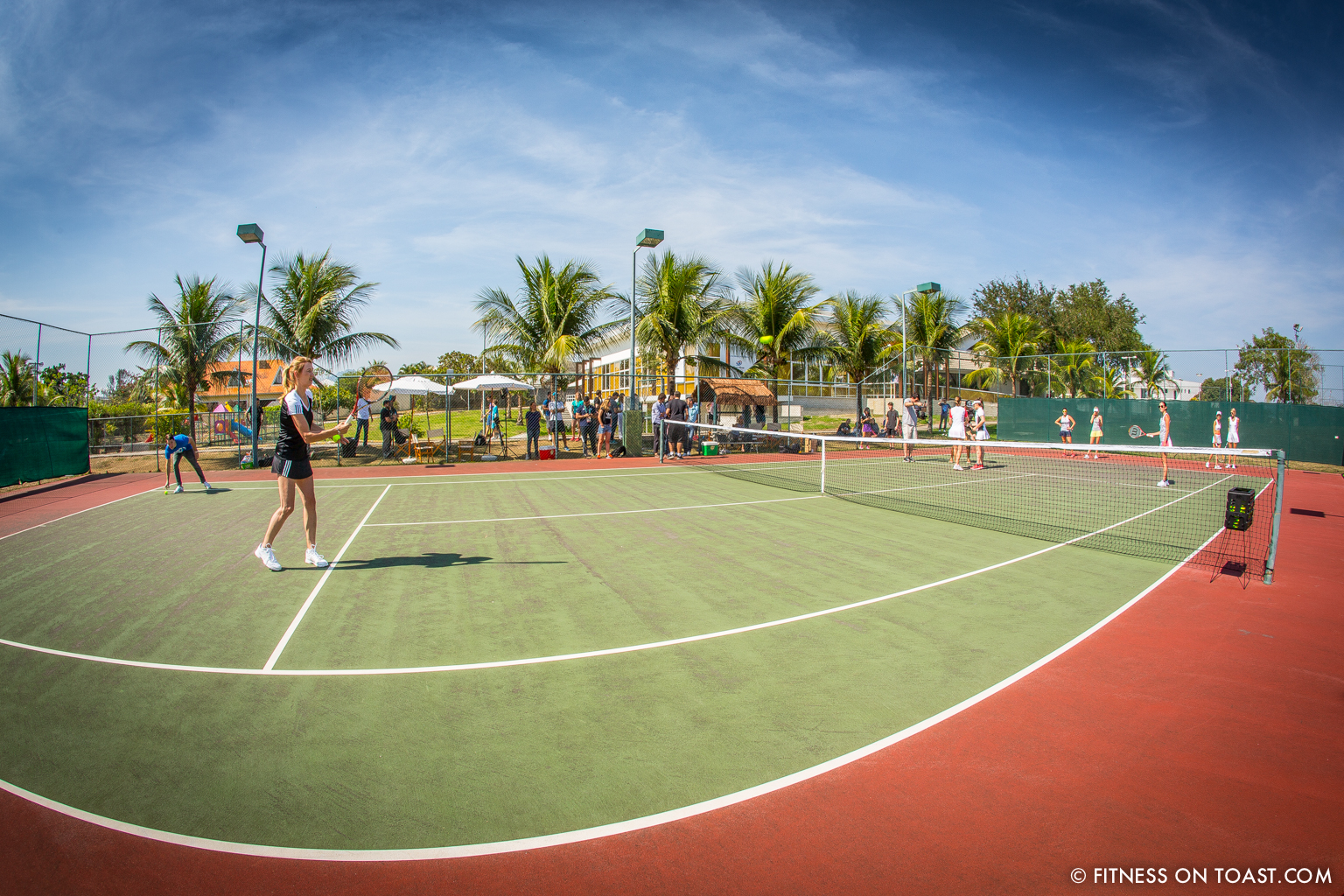 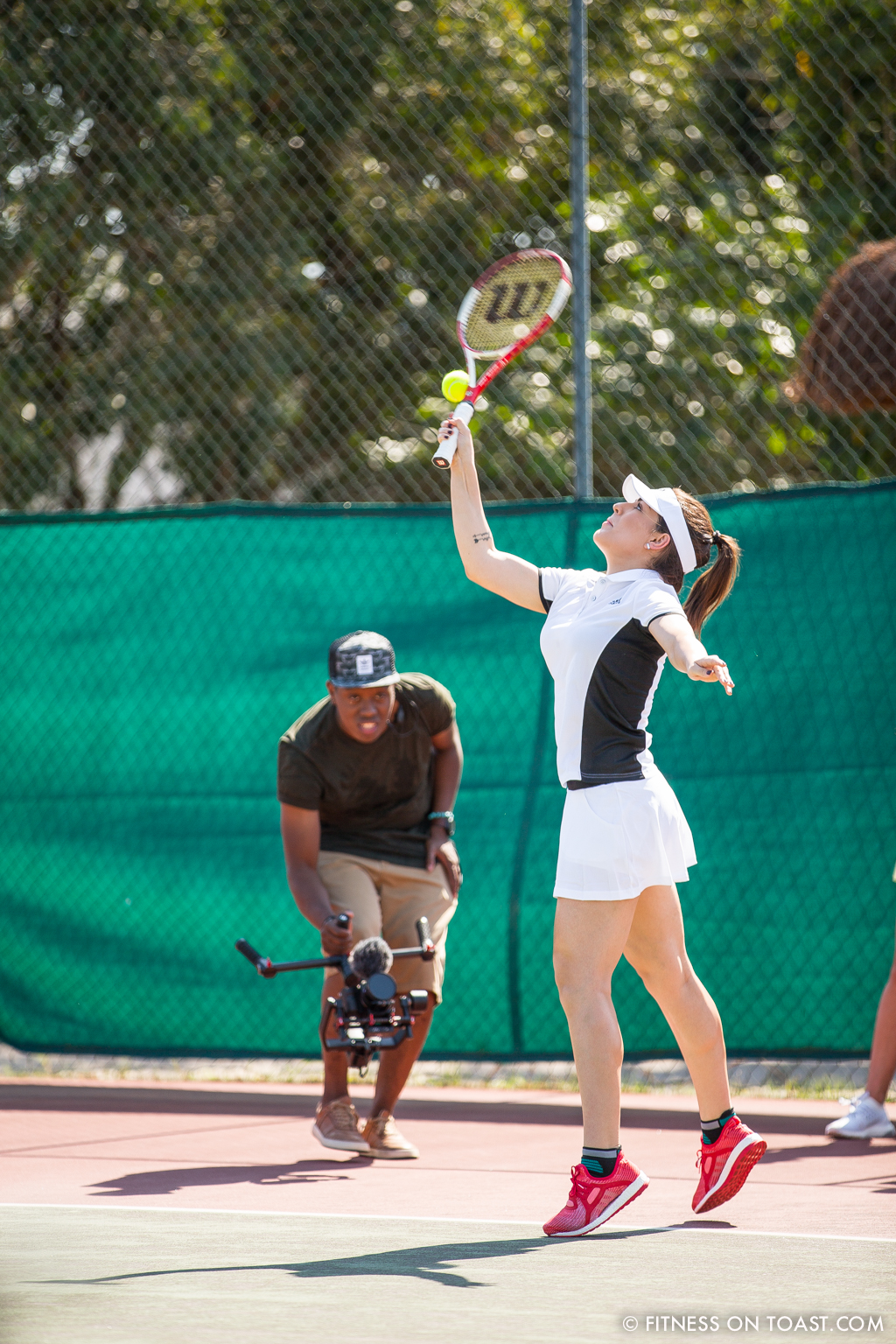 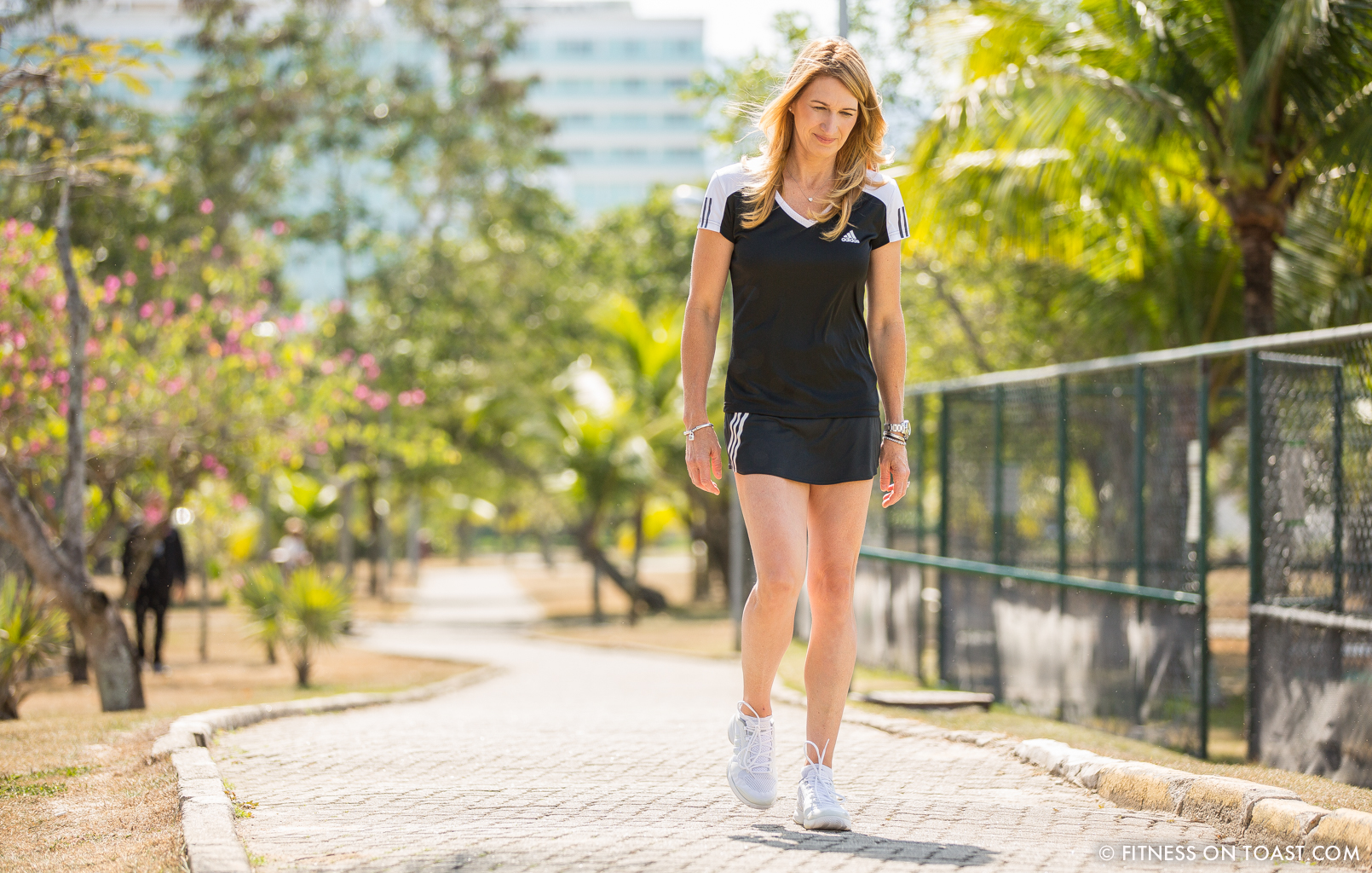 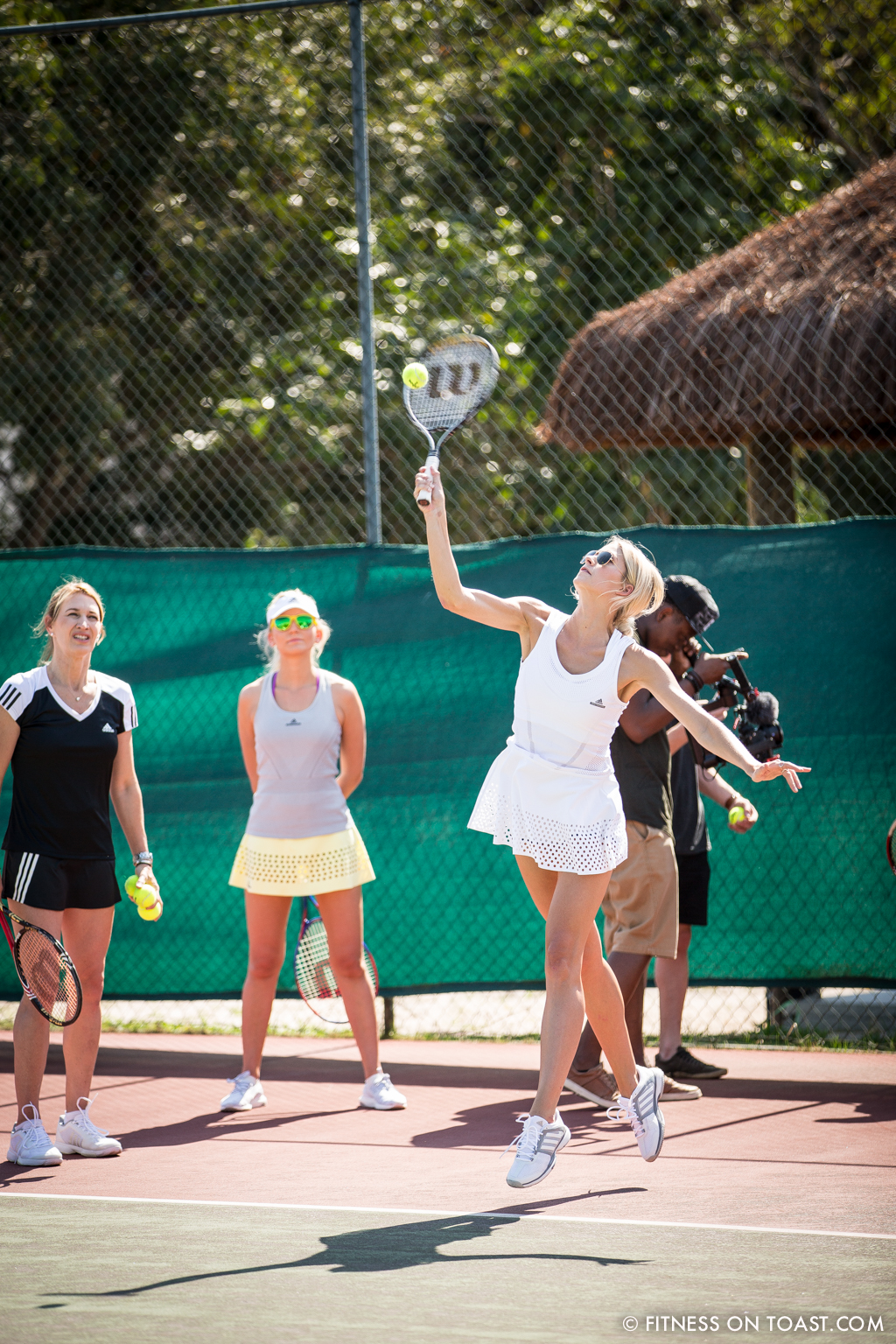 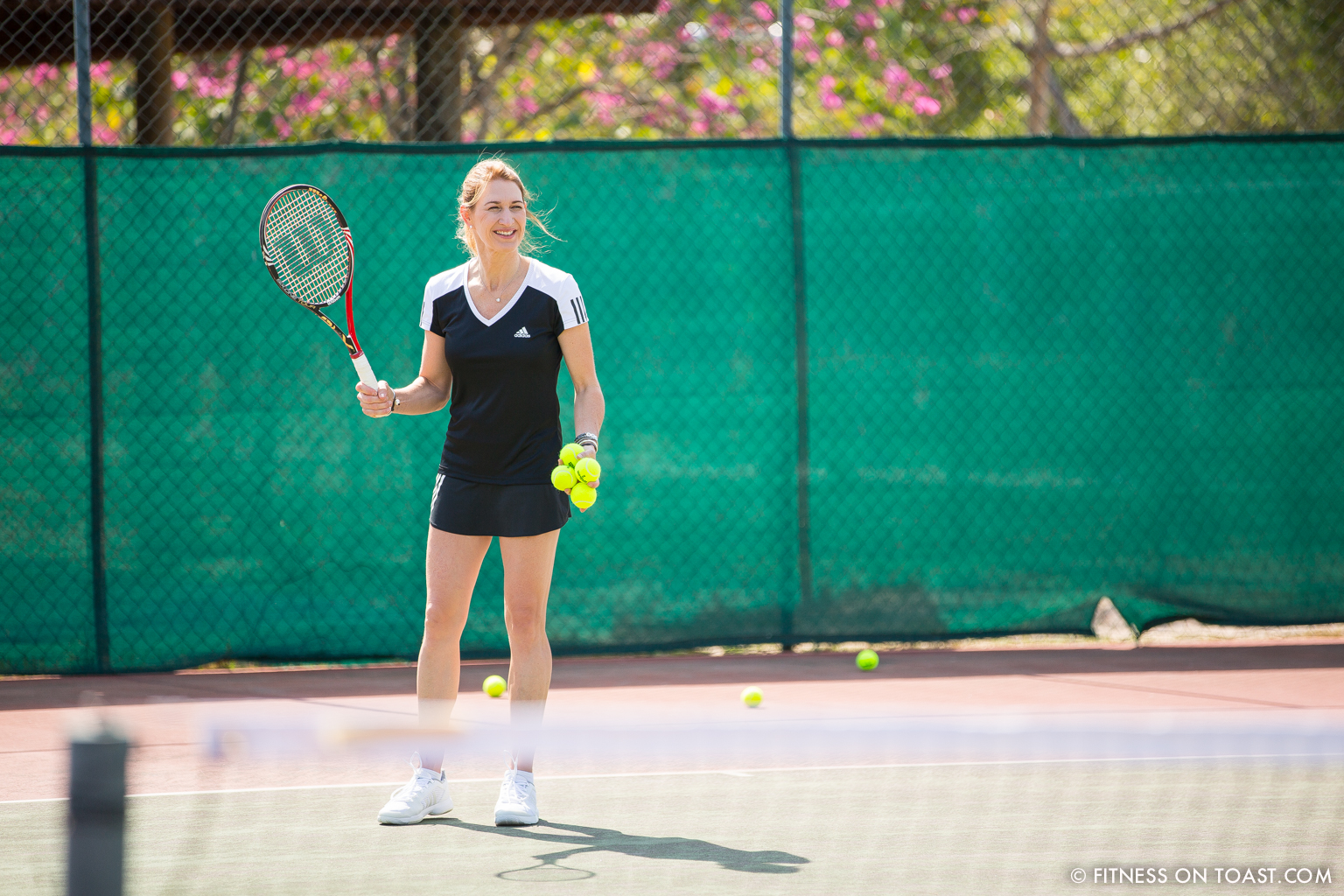 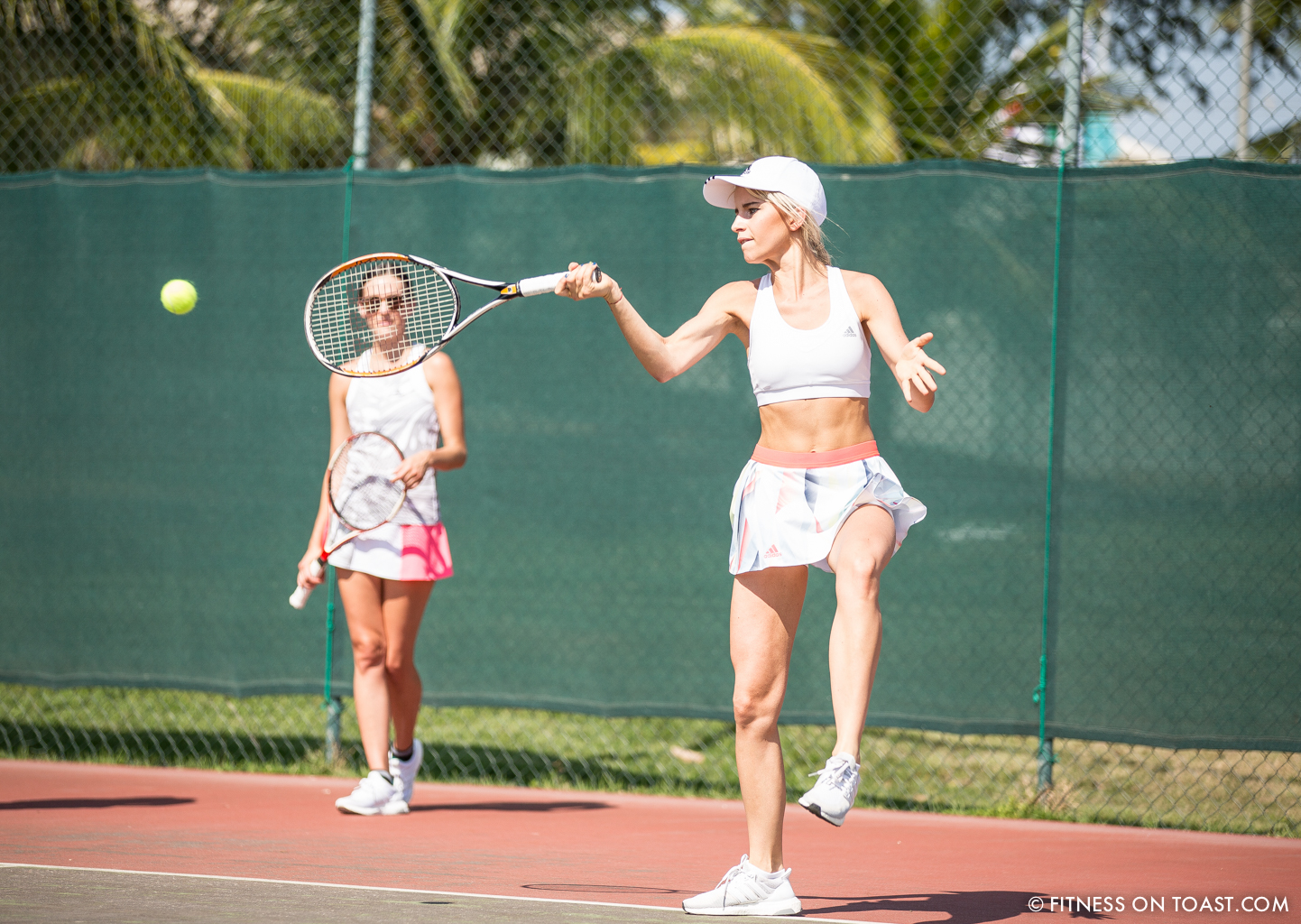 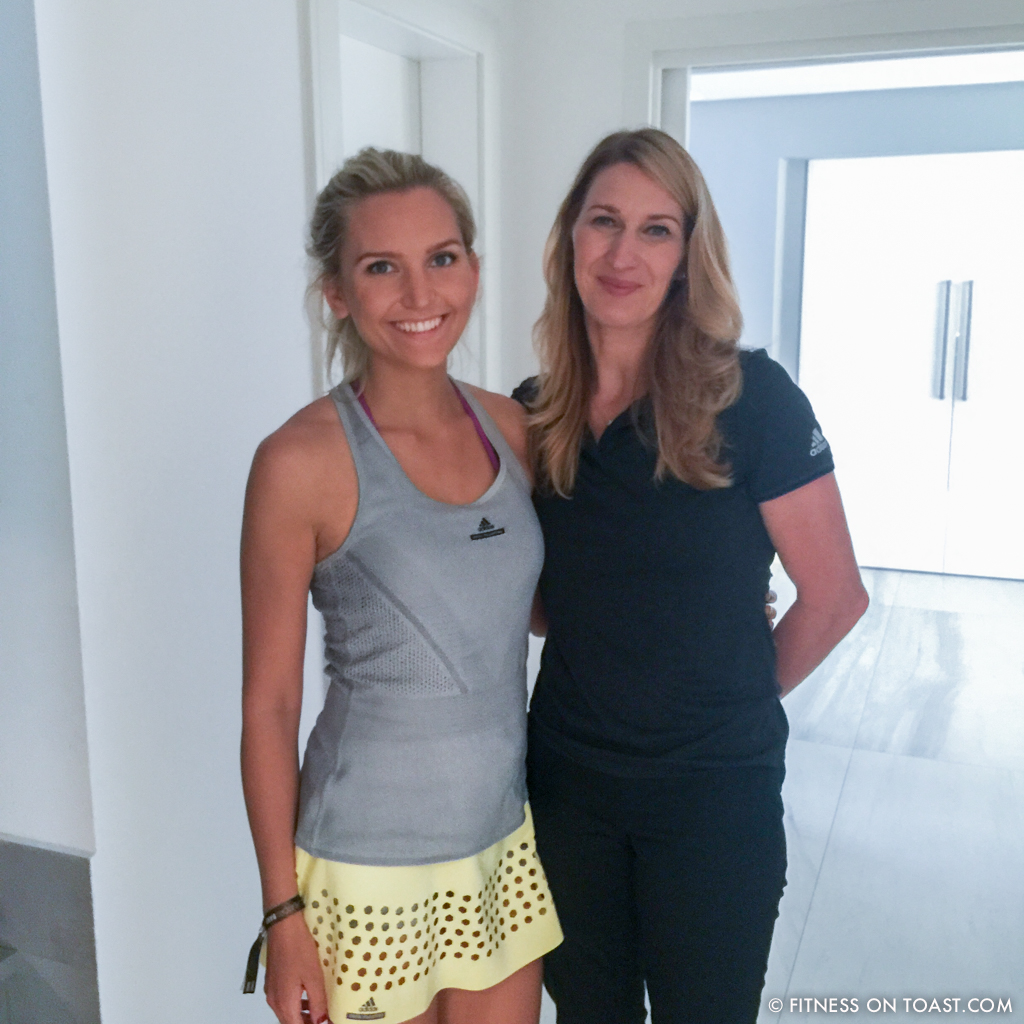