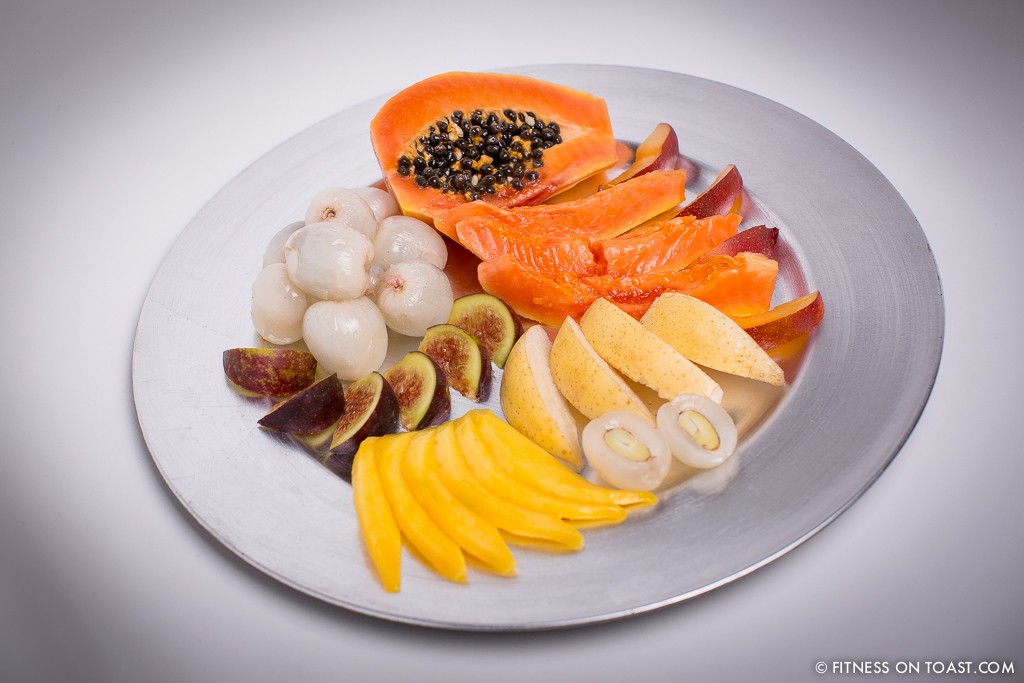 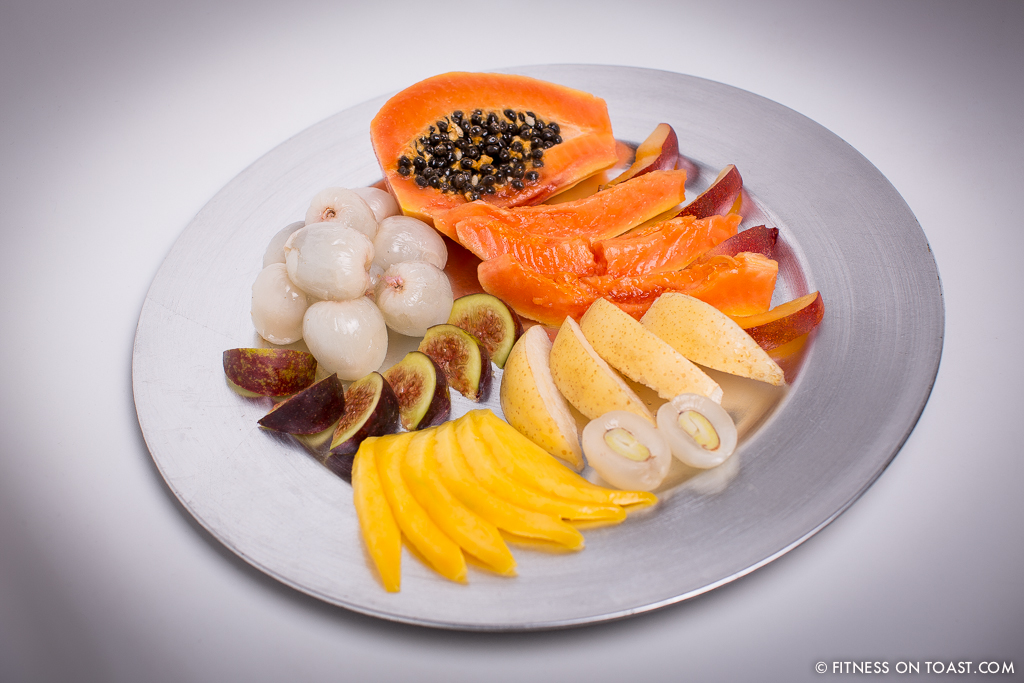 Time to come clean; I’m a typical ‘December human-being’, and whilst I’ve stuck to my healthy eating as well as maintained my training, the portion sizes have been way too big and there have been a few too many Christmas treats; “I’m craving sugar right now, far more than I did before Christmas“. If that sounds familiar, here’s an exotic fruit salad to help ween you (and some friends – its pretty, so why not entertain with it!) off the festive sugar. Banished are the leftover mince pies, and taking their place is something altogether more natural and nourishing. Whilst a large amount of the 200 calories (per quarter of a  portion of fruit this salad) are from sugar, they’re natural, fibrous, hydrating and packed with minerals and vitamins. “Which”, you say?

1) MANGO
Has zero saturated fat, cholesterol and sodium, is a great source of dietary fibre (aids digestion) and Vitamin B6 (helps in maintaining normal nerve function). It’s also been shown as important for neurotransmitters such as dopamine and serotonin, which will make you feel happy! Admittedly, very sweet and therefore a large portion of the 200 calories in a mango are from sugars (15 g per 100g is sugar) – so caution, to be eaten in moderation.

2) FIGS
Luscious little fruits, rich in texture and flavour, boasting a chewy flesh and a crunchy seed, are high in dietary fibre (11% of each fig), high in potassium (which helps normalise blood pressure), and have been shown to lower triglyceride (fat) circulation in the blood.

3) RAMBUTAN
Super-exotic, it’s very high in vitamin C (a 100-gram portion contains c.40 percent of your RDA). It’s also a great source of niacin (also known as vitamin B3). Inside this hairy fruit, aside from a high concentration of vitamin C, you’ll find other vital compounds required by the body every day – iron, phosphorus, protein and carbohydrates.

4) PAPAYA
Fantastic for healthy, glowing skin since it’s a very dense source of Vitamin A and ‘Papain’ – an enzyme helpful in digesting proteins, which help remove dead skin cells, and break down the inactive proteins whilst keeping skin hydrated. Also, a vast 700g papaya contains an impossibly small 300 calories, and mounds of dietary fibre.

5) JAPANESE APPLE PEARS
Crisp and crunchy in texture, they’re refreshingly light, and are void of saturated fat, cholesterol and sodium. Plenty of vitamin/mineral benefits too, such as potassium, magnesium, folate and vitamins C and K.  Each mid-sized fruit is c.100 calories, which makes it 15% less calorific than its traditional cousin, the conference pear! Again, moderation is required due to the *natural* sugar content. Either way, the skin of pears contains at least three to four times as many phenolic phytonutrients as the flesh, which bestow them with antioxidant and anti-inflammatory properties. The skin’s also been show to contain about half of the pear’s total dietary fiber (30% of the carb content).

6) LYCHEES
A great source of copper (helps the body utilise iron and reduce tissue damage caused by free radicals), weighing in at just 60cals per 100g with a very low glycemic load, and with each 100g serving representing 120% of your vitamin C RDA!

7) NECTARINES
A very good source of beta-carotene (antioxidant that turns into Vitamin A when metabolised). It’s often found in fruits and vegetables with bright red, orange and yellow colours – great for bone development and healthy eyes. Also, they taste great. As do all of the above! Just buy them ripe or leave them on a shelf above a radiator for a few days!